On Kartik full moon (October-November), three hundred and thirty million Hindu Gods are said to take a ritual bath in the serene waters of the Pushkar Lake, making it an auspicious time when mere mortals can share in its holiness.

With so many celestial deities blessing the waters of the lake and the ancient temples on its fringes, pilgrims throng the fifty-two bathing ghats for the Kartik Snan – holy bath. Infused with exceptional powers each lakefront ghat bestows upon the believer the opportunity to be blessed by a miracle. 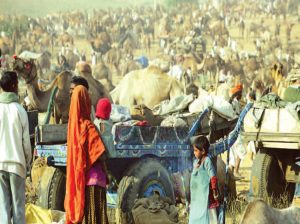 There’s Naga Kund for fertility, Roop Tirth for beauty and charm, Kapil Vyapi for curing leprosy and the waters at Mrikand Muni Kund bestow wisdom. Even if one is not on the lookout for a miracle of that sort, a dip in the Pushkar Sarovar is said to wash away past sins.

And all this is overseen by the sacred temple town’s custodian deity – the four-headed Lord Brahma, creator of mankind. Such immense celebrations, stretching into days, need provisional measures, which begin soon after Diwali (Kartik Amavasya). Herders and traders travel long distances on foot, in carts and on tractors with their livestock for the annual camel bazaar, blissfully unaware that they rewrite history each year for the Unt Mela, billed as the largest camel fair. 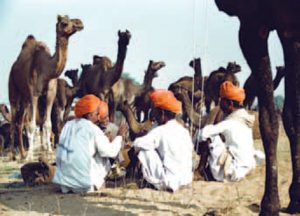 The scrublands beyond the west of the Brahma temple transform into acreage of closely pitched tents and temporary barricades for the bleating and bellowing livestock. But the real flurry of activities is awakened five days before Kartik full moon.

2. Early bird gets the Camel… and some local Hookah

At daybreak, on Prabodhini Ekadashi, the rising sun slowly peels away the wintry haze, revealing the excitement of a timeless fair. Pushkar undergoes a time warp. The expanse exemplifies ancient landscapes, now lost to textual history – traders mounted on jute charpoys assessing their stock of masticating camels tethered to the bamboo pegs; trails of smoke billowing out of pitched tents and curling into the skies. 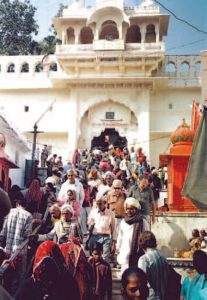 Beyond, the sand dunes, otherwise barren and parched, are taken over by more than fifty thousand camels. For the next few days, his is their turf. Livestock and traders crowd the dunes in a restive bustle. In the motley, sunrays frayed through the spiky Khejri trees, camels, cattle and horses stomp restlessly upon the driest of earth. In muddy white attire and capped by colourful pagris (turbans), merchants squat in circles unwinding over a shared hookah.

3. Spot the Camel of your dreams

Their limited pastoral knowledge conveys interesting camel facts: The strong bushy eye-lashed ones belong to Bikaner whereas the racing ones are from Jaisalmer. The one-humped Indian camel (camelus dromedarius) is the descendant of the Arabian breed and is more closely linked to the Llama than its two humped Bactrian cousins.

From all across Rajasthan and neighbouring Saurashtra, livestock is brought to the annual auction of Pushkar. A good harvest from the preceding monsoon results in modest deals and about ninety percent of the animals are traded but discouraged from being taken away from the festival grounds in view of the tourist influx. 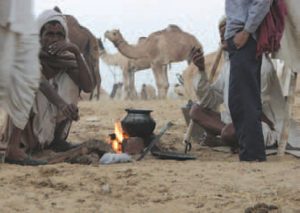 With the fair authorities offering free fodder, buyers are induced to stay back. A day before Kartik Poornima the traded animals are allowed off the grounds in typical rawangii (dispatches), where scores of camels kick up the desert sand into low aesthetic clouds of dust against the melting sun.

The buyer has a mental checklist while inspecting a camel – The teeth and posture are physically examined. With the camel sitting, the tail is tugged sharply to check on the reflexes.

For the difficult buyer the seller takes every effort to make his wares stand out in the large crowd. Each of these velvety animals is ornately adorned with tinkling bells, bridles and pompoms; some have their fur sheared in geometric motifs evoking the spirit of Rajasthan’s arts. Symbolic hair motifs called moondra are carved onto the mowed fur and tattoos are stamped on the sheared skins using black henna and heated ladles. Meticulously groomed, the camels are then lined up and auctioned. 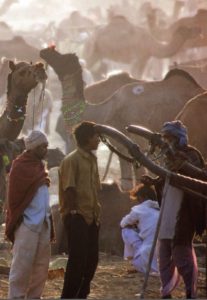 A shallow crescent along the north of the lake connects Pushkar’s three main ghats. To the northeast is the Varah Ghat named after the third incarnation of Vishnu, the Boar; the Gau Ghat, with a small marble statue of ‘Gau Mata’ (motherly cow), is where the ashes of Mahatma Gandhi and Jawaharlal Nehru were deposited in the lake. The third is the Brahma Ghat, believed to be where Lord Brahma took a bath before sitting for a yagna (fire sacrifice).

Brahma released a swan with a lotus in its beak and decided that he would perform a yagna where the lotus would fall. When the pushpa (lotus) fell in Pushkar, from where the town gets its name, Brahma’s wife Savitri was not around. 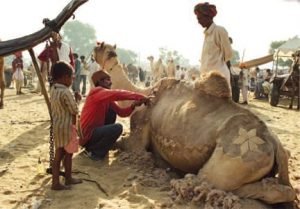 Since a yagna cannot be performed without a spouse, Brahma married a local shepherdess, Gayatri, and made her sit around the sacrificial fire. Savitri, furious on seeing this, cursed Brahma that he would not be worshipped anywhere else apart from Pushkar. 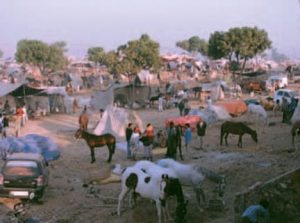 7. Check out the ‘miracles’ but keep the wallet safe

Bearded sadhus with coarse matted dreadlocks offer pilgrims free audience. Some fake novices attempt to draw crowds with strange tricks, which they try to pass off as miraculous feats. At Pushkar spirituality does not come free. During Kartik Poornima this laidback settlement revels in the quick bonus of post-Diwali business – the monasticism of the town giving way to the lure of fast money with prices spiralling up. 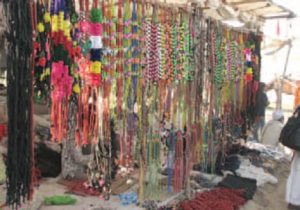 Even priests idling along the ghats take advantage of the need of pilgrims by often demanding astronomical donations for small rituals. The road leading to the fairgrounds winds from behind the Badi Basti – Pushkar’s main street parallel to the lake – meandering past the Brahma temple. 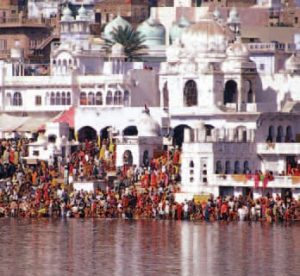 For visitors, women dressed in colourful, mirrored skirts lay their wares of trinkets and puppets. Strings of stalls take up the pinched spaces where people gather in groups, bidding and haggling. People from pastoral communities, distinguished by their groomed moustaches and colourful Bandhani pagris, pensively gaze at the whirring handheld tool that creates vivid tattoos, mostly in Devnagiri scripts, of their clans or communal deities, upon their forearms. 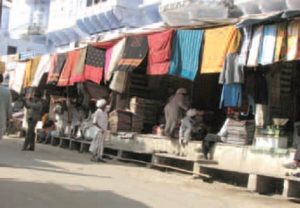 Others gather in circles around magic shows and the wrestle of snake and-mongoose. Girls do tightrope balancing acts and cartwheels through flaming rings. To enhance the festive atmosphere, the Fair authorities also line up a number of events at the nearby mela (fair) ground, where locals compete with tourists in tugs of war; camels are raced and paraded and folklore and dance inspire melodic evenings. 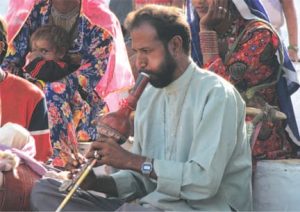 Seen from the summit of the Savitri temple, perched on a nearby hill, the camel bazaar blooms in the stark stretches of the desert as a spread of monochromatic flourish of celebrations. The pampered land composes opportune frames of medieval fantasy as the westerly setting sun suspends low over the golden dusted sand dunes. 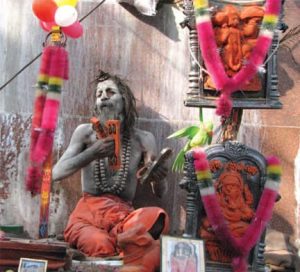 Kerosene stoves flicker against the distant dusk. And as the mellow moon lights up the festival sky, soulful recreations of the age-old romance of Krishna and Radha rent the carnival air. And in return, this fairy-tale land is blessed once again and the cycle of sacredness continues…year after year.