Local and foreign art historians have admired this remarkable stonework, which shows the skill and the meticulousness of the craftsmen employed on this site during the second half of the 16th century. Recent historical, ethnographic and art history studies in Ahmedabad, Gujarat and India also recognize the importance of this site as a major milestone in the art history of the “Gujarati style” (the particular provincial style of Gujarat during the rule of Muslim kings) and hence, it is an essential monument for understanding Indian architecture under the Muslim rulers. 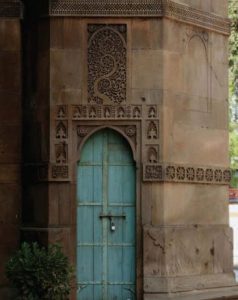 Thanks to a marble inscription that was fixed above the main mihrab (niche on the qibla – or back wall – of the prayer hall, indicating Mecca and so the direction for prayer), we know that the mosque of Sidī Sayyed was completed in H 980 – 1(1573-74 CE). The identity of the builder “Sidī Sayyed” remained a mystery for many years as the court chronicles do not mention his name, which actually is a compilation of two titles, both derived from the Arabic honorific title “Sayyid” or “Sayyed”. In Gujarat, “Sidī” was a usual term used for the “Habshi-s”, Abyssinian slaves from the east African coast.

We know from the royal chronicles that it was a common feature for the late Sultans of Gujarat to integrate brave and trustworthy Habshi-s into their close circle. That is how the Habshi known as “Sidī Sayyed” became one of the important noblemen of the court of Sultan Muzzafar III. He built the mosque, which carries his name, close to the Bhadra fort on its north side and was first buried there after his death in 1576 – 77.

His burial place was later transferred to the tomb of the poet Sheikh Abdul Mu’ti Bakathir (who died in 1581 – 82). During the extension work of the Bhadra Fort, under the Moghul rule (17th century), the mosque of Sidī Sayyed served as a supporting structure with the qibla wall of the prayer hall being used as part of the new north-east brick wall of the fort. The remains of those structures were still to be seen during the British rule in spite of the degradation that occurred in the 18th and 19th centuries.

Restoration by the British- Good or Bad?

The British administration noticed the monument and decided to renovate it and, in the process, removed the central jālī, which was sent to the “South Kensington Museum” (known today as the Victoria and Albert Museum), in London. In spite of being on the protected monuments list of the Archaeological Survey of India, the Sidī Sayyed site, unfortunately, continues to suffer a lot of damage, mainly caused by the increased traffic and urban development in the walled city. 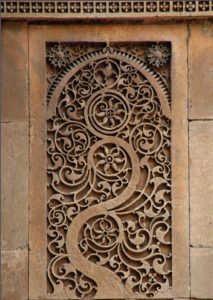 What you see today. What they saw yesterday.

The prayer hall remains the only historical structure of the site, while the original walls and gates of the compound and the old ablution tank have disappeared. Study of other Ahmedabadi mosques of the period indicates that the first courtyard may have had a square plan reaching the prayer hall on the west and the actual limit of the site on the east. The prayer hall was built entirely with sandstone, a tradition in the Maru-Gurjara region: which survived in Gujarat until the end of 16th century for all monumental buildings and the prayer hall of Sidī Sayyed is the last example of an Islamic monument built entirely in sandstone in the city. 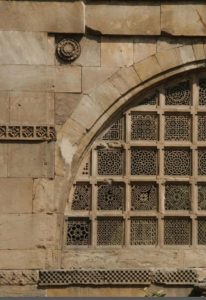 Compared to other Gujarati stone monuments of the sultanate period, the Sidī Sayyed prayer hall shows extremely streamlined volumes: the plan is a simple rectangle and the building has a single level.

The east facade is flanked by two impressive minaret bases and presents five large openings, produced by pillars supporting arches. For this reason, and because the east facade does not have a wall, the monument can be classified as an “open facade type”. In this type of prayer hall, the facade seen from the courtyard presents a pair of minarets built on either side. 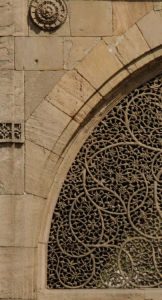 The two minarets of the Sidī Sayyed mosque are not higher than the prayer hall – a common feature in Ahmedabad, where most of the minarets were brought down by the 19th century earthquakes. However, the case of the Sidī Sayyed prayer hall is different – written sources report that it never had tall minarets: it seems that the minarets were never completed, which can be explained by the conquest of Ahmedabad by the Mughal Emperor, Akbar, in 1573-74.

The disturbances caused by those events as well as the resulting deep political changes (we do not know what happened to Sidī Sayyed after this date) explain the interruption of the construction work at the Sidī Sayyed mosque. In spite of the work getting interrupted, the monument shows enough carvings to reveal the skills of the craftsmen employed in the construction.

Ornaments and motifs used for decoration are easily identifiable as typical designs of the Gujarati style even if we can see a clear formal evolution, since the work done in Gujarat, during the reign of Mahmud Begda. The various motifs here have far more stylized forms, which can be easily seen on floral patterns like the lotuses carved on both sides of the decorative arches: if we observe the lotuses of the mihrabs in the prayer hall of Rani Sipri in Astodiac(1514) or Muhammad Chishti in Shahpur (1565) their organic forms show multiple rows of petals, where even the central veins are seen.

On the contrary, the lotuses of the Sidī Sayyed mihrab are simple concentric circles, whose reliefs and finish prove that they are accomplished designs (and not unfinished carvings like those of the minaret). Only basic geometrical or highly stylized motifs were used and the friezes show simple check patterns and diamond shapes, the jālīs reveal geometrical motives and the usual trees of life represented on the minarets have become distinctly stylized arabesques (contrary to the two famous trees on the jālīs of the qibla wall). 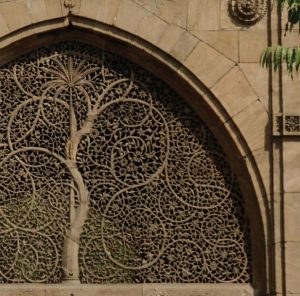 It gets more complicated

This ornamentation type is complementary to the simplifications of form we already mentioned: the monument shows a clear wish to shift from the “sculptural” mode (typical of the stone Maru-gurjari style) to the “wall” mode, where importance is given to large volumes, arches and ornamentation on flat surfaces (largely used in Persia and the regions under its influence). 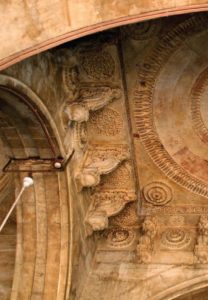 In this process, the original “Gujarati arabesque”, largely developed under Mahmud Begda (as can be seen in the monuments built during his reign in Ahmedabad and Mahmudabad -near Champaner), attained its apogee during the construction of the Sidī Sayyed mosque, in an organic form, on the two jālī trees and, in a stylized form, on the minarets.

Evolving to a new Genre

Evolution is not only evident in the techniques of the craftsmen at work but also in the introduction of new architectural methods. This points to the fact that architects acquired new knowledge along with the craftsmen and workers on the site.

The common technique employed till the middle of the 16th century for span bridging and erection of domes was the construction of an octagon made out of eight lintels resting on a group of twelve pillars. The dome stones used to rest on this octagon, first as a trabeate structure and later on as a real vault. In the case of the Sidī Sayyed prayer hall, four pillars suffice for a roofing unit as a structure of pendentive coupled with squinches makes the link with the above vault (Pendentive and squinches are complex architectural structures that need perfect knowledge of vaulting techniques – for the architect as well as for the craftsmen). 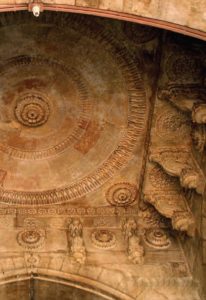 Consequently, the existence of pendentive-squinch structures in the Sidī Sayyed prayer hall, built seventeen to eighteen years after the mosque of Muhammad Ghaush, can be explained by two hypotheses: either the architect who was active in the construction of the Muhammad Ghaush mosque was also implicated in the Sidī Sayyed work site or the local architects learned the pendentive-squinch technique in the 1550s from the Gwalior architects.

Though the process was abruptly brought to a halt by the arrival of the Mughal Emperor Akbar, what remains nevertheless reminds us of the potential of an emerging style wrought by the fusion of cultures and creative experience.