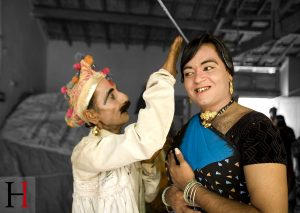 The Indian sub-continent is alive with numerous forms of folk theatre that entertain, inform, narrate, stimulate and provide a vibrant connection between the individual, the community and the spectacular spirit of the divine. It is often a vehicle by which a people reaffirm their beliefs and express their aspirations. The Bhavai of Gujarat, a composite performing art, is a good example of the role folk theatre plays in the lives of a people. 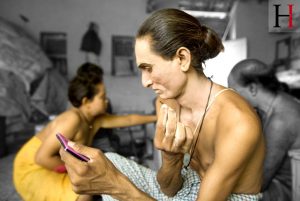 Combining dance, drama, singing and folk narratives, this dynamic form is all-encompassing. Appropriately, the word ‘Bhavai’ is said to have been derived from the original term ‘Bhav vahi’ which means life sketch. ‘Bhav’ is also another name for Lord Shiva who is the deity of dance.

This all-encompassing spirit of the Bhavai has made it the common man’s theatre with a variety of elements coming together to create an unforgettable experience. There are the musicians who play on the ‘bungal’ (local wind instrument) and the ‘ranglo’ whilst the ‘Vidushaka’ (the clown) keeps alive the air with humor. The Bhavaiyas (singers who were earlier known as ‘Bahuwaiyas’ meaning ‘multi-talented’) mesmerize the audience with poetry set in classical ragas such as Desh, Asavari, Sohni, Kalingada, Bilawal, Majh, Lalit, Paraj and Bhairavi.

It is evident that dance is the soul of this folk performing art, enlivening it with aesthetic charm and matchless variety. In fact, Kathak lays claim to have influenced the patterns and rhythms of movement – the repetitive ‘Tat tha, tat tha’ forming the very basis of the dance. However, the performer is more than just a dancer, he is a multi-talented persona who acts, dances sings and even plays a folk instrument when needed. He is also a juggler. In fact, he epitomizes the very spirit of the Bhavai.

Traditionally, men play both male and female roles, taking on the feminine sensuality and grace of Goddess Bhavani. The performances are marathon – beginning in the evening and going on until noon of the next day. After the anchors Ranglo and Rangli have introduced the evening’s performance and set the mood, they first invoke the Gods. ‘Avanu’ is a keenly awaited piece. A specific line of poetry is sung repeatedly over and over again to suggest the entry of the next character who appears on stage,  swiftly pirouetting in rhythm.

Jhuthan’s Vesha scene is particularly popular. Here the man’s beloved enters with burning torches in her hands and together they dance in unison. In Kerba’s Vesha, the dancer performs with anklets beating out musical tinkles whilst rotating steel thalis on wooden sticks, singing –

(do not plant the saplings at the fencing, as the fencing only curbs it, this black-headed man only spells magic on other men)

Long ago, Bhavaiyas performed even more daring and artistic dances. Some would wrap themselves with shawls (carrying vermillion powder with them) and dance over a plain white cloth. The powder which would be sprinkled on the cloth as they danced and create an image of Lord Ganesha and a dancing peacock under their feet.

The Mahiyari’s Vesha would present various balancing acts. A large pot of water would be rested on steel glasses on the head of the dancer and then he would then lift his legs towards his head and touch the pot with his toes. The sword dance is another that has rarely failed to catch the imagination of audiences. Here the dancer arranges eighteen to twenty swords all around his body and holds four swords in his hands whilst he dances, performing dangerously as he goes along. It is often said,

(the blazing sword, melodies of the harmonium, taps of rhythm, sound of the anklets and appreciation of the audience)

these are five tests of a skilled dancer.

Origin of this art

When the question of origins is raised, it is usually believed that the initiator and mentor of the  Bhavai was the poet Asait Thakar from Siddhpur in  North Gujarat. His three sons continued the tradition. In the early days, those who performed the Bhavai came to be called  ‘Targalas’. This grew to become a community name.

The Bhavaiyas are no longer the itinerant actors that they once were – wandering western India for eight months in a year. Nowadays, they perform only when they get an invitation to wedding functions and certain religious ceremonies. Surviving on patronage, they struggle to retain the perfect balance between creativity and earthiness in a world of contemporary demands. In their minds and bodies and spirits rests the future of this dynamic folk form. 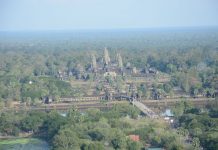