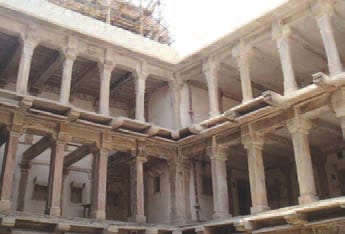 Chanderi – when one thinks of this town that lies in the heart of India what flashes across the mind is the rich textile that is beautifully transformed into saris and fabrics. But this town has more to it than its famous textile. This historic town of Chanderi located in the fertile valley of the ancient Betwa river has a rich history that was shared between Pratihara Kings, Delhi Sultans, Mandu Sultans, Bundela Kings and Scindias of Gwalior. It flourished under the Malwa rule in the 15th century.

The town abounds in monuments that speak the tales of the past rulers. The town has two distinctive divisions- Shehar Bahar and Shehar Andar; the outer and the inner city respectively. The Shehar Andar is characterized by multi-storeyed palaces of the governors approached through cobbled stone lanes laid out in a checkerboard pattern. The monuments in this inner city are plain and unembellished as compared to the decorated and exquisitely designed tombs, chhatris and commemorative gates in the outer city.

A landmark complex in the Shehar Andar called the Mahal Parisar was built in the 17th century by the Bundelas. It is an unprotected monument under the ownership of the Nagar Palika. The enclave comprises of two buildings aptly called the Raja Mahal and the Rani Mahal; these are stone structures with a gap in between where a stepped well with a passage is located.

Raja Mahal is built of local grey and white sandstone and is characterized by an inner courtyard around which there are open, pillared galleries. It is a three storied structure with a large terrace and is flanked by two towers one of which is seven storey high. Rani Mahal is a much more decorated square-shaped building with stone jaalis and carved brackets all around. It is also a three storied structure with colonnaded halls on each floor.

On the roof level, there is a gallery with domed corner pavilions giving a spectacular view of Chanderi fort. Attached to the Rani Mahal is a two-chambered old structure which functioned as a Hammam in ancient times.

The Mahal Parisar was taken up for restoration by INTACH in 2007 to be used for socially relevant purposes. It was part of the conservation and tourism development project involving three towns- Gwalior, Chanderi, and Shivpuri. The complex was in a state of neglect with unabated growth of vegetation and insensitive extensions and encroachments, maligning not only the façade but also the heritage value of the place. Some parts of the building had collapsed and the complex served as a big dump yard for the city.

The restoration process was tedious and required a creative approach to establish its significance. The complex not only needed restoration but also partial reconstruction from the ruins. Surveys were conducted and vigorous studies were made so that the originality of the place could be restored to the smallest of details. Some parts were dug out in excavation and then reconstructed in the surviving plinth in a traditional architectural vocabulary.

The project was amongst the biggest conservation projects to be executed by INTACH. It served as a yardstick for future projects of such a scale and established the significance and need for community awareness and involvement. Skills in conservation and building crafts were also revived through intensive research.

Highlights of the project

The success of the project has increased tourism to the region and has thus enhanced the local crafts’ and handlooms’ industry thereby generating economic benefits for the local community. The project has proved to be a classic example of the beautiful amalgamation of past glory with the modernity of the present, instilling pride in not only the team but also the people of Chanderi.