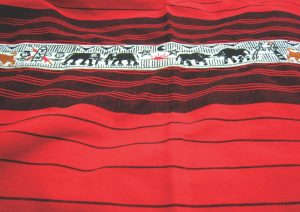 The Ao-Naga warrior shawl is called Mangkotepsu. This is an exclusive male attire and in the olden days, a man had to earn the right to wear this by taking heads in warfare, through acts of exceptional bravery and by giving ‘Feasts of Merit’ as proof of his wealth. Anyone wearing it without these credentials was taken to task by the village council and had to pay the appropriate fine for violating the code. 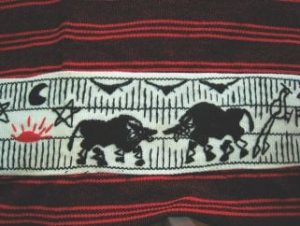 Legend says that womenfolk of Chungliyimti, the first village established by the Aos, designed this shawl as a token of honour to encourage their men to ward off repeated attacks by neighbouring tribes.

The white strip in the middle carries the symbols of bravery and courage and the sun, moon and stars signify the resulting fame of such warriors. 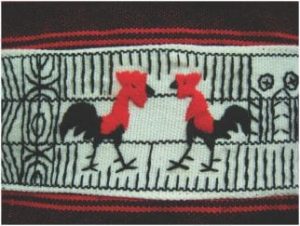 The animals depicted are also those with tremendous physical power which becomes synonymous with the valour of the men. The hornbill is a revered bird whose feathers are used for decorative purposes in ceremonial costumes. The mithun (buffalo-like creature) indicates the wealth of the wearer because only the very rich people could rear these animals. Other symbols are representations of the weapons and shields used by men during warfare as 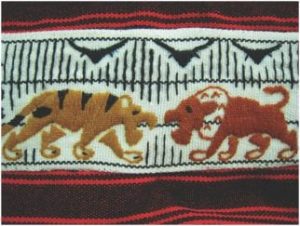 well as peacetime. In the olden days, the symbols were etched on the cloth by using natural black dyes only but nowadays agents like fabric paints and even hand-embroidered designs of different colours are used. However, the red and black combination of the borders have remained unchanged. 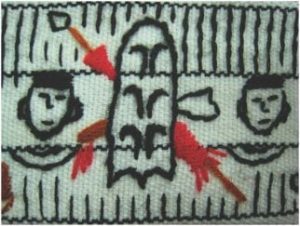 It is taboo for women to wear this shawl although it is they who have woven and decorated it. We know it’s unfair, but it’s our duty to tell.