The banks of the River Hugli resound with the enthusiastic chants of ‘Bolo Durga Maiki Jai’ (Glory be to Mother Durga) as devotees carry the idol of the Goddess on their shoulders, in a procession for immersion. Only after an entire year will Devi Durga ‘return’ to her home, to spend five days among her devotees. These five days will be celebrated as Durga Puja, the grand festival of West Bengal and the most important event in the calendar of all Bengalis. 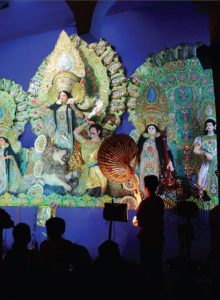 Devi Durga is a Hindu goddess who is worshipped as an embodiment of creative feminine force or Shakti, believed to be the fierce form of Lord Shiva’s wife Parvati. She is the Mother of the Universe, revered for both her gracious as well as her terrifying form. Originally held in the Bengali season basant (Spring), Durga Puja was called Basanti Puja. It is said that later, Lord Shri Ramchandra, through his devotion, invoked the Goddess Durga to descend on Earth during autumn and bless him so he would be victorious over Ravana. Since then, Shri Ramchandra’s Akalbodhan (untimely worship) of the Goddess became more popular.

At present, Durga Puja in Bengal is a public festival whereas in earlier times it was mainly a family festival, which was observed with great pomp and show by the Bengali elite. In October 1757, Durga Puja was held with unimaginable grandeur for the first time, by Raja Nabakrishna Deb Bahadur, in his newly built ‘Thakurdalan’, inside the famous palace at Shovabazar in present-day Kolkata. Prior to this, the old city of Kolkata that then comprised of the three villages of Sutanuti, Govindapur and Kolkata had never experienced Durga Puja on such a scale. The Maharaja invited both commoners and dignitaries alike, to attend the puja.

Durga is generally believed to be surrounded by her four children but a distinguished researcher in Indian Culture, Dr. Pritimadhav Rai provides us with another view. He argues that, in essence, Lord Ganesha, Lord Kartik, Goddess Saraswati and Goddess Laxmi are not Goddess Durga’s children but her attributes. 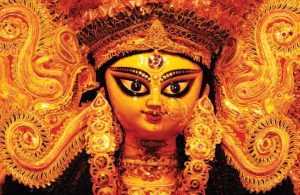 Today, even amidst the restoration work being carried out at Shovabazar Rajbari, the over 250-year-old Durga Puja is still being held by the descendants of the family in the historic Thakurdalan on the lines of its age-old legacy, attracting thousands of devotees. The dazzling image of Devi Durga has remained unchanged through time as the same ancestral moulds are still being used.

4. What do those beautiful chants really mean?

Devotees pursuing distinct professions started worshiping specific attributes of the Divine Goddess for their convenience and over the years the attributes of knowledge, success, wealth, and valor took the form of Goddess Saraswati, Lord Ganesha, Goddess Laxmi and Lord Kartik respectively.

5. The Idol and her beauty 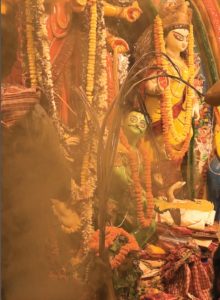 The colour of the images of gods and goddesses are in keeping with their description in the Chandipath (the Story of Chandi or Goddess Durga). It is interesting to note that Goddess Saraswati, symbolic of the one and only quality of Vidya – pure knowledge which is unadulterated, is ‘shwet’ or white complexioned.

In opposition, Goddess Durga, an embodiment of the three qualities of satwa (inactivity), rajas (activity) and tamas (non activity) has a bright yellow complexion. As elsewhere, artisans start their work on the image on the auspicious day of Akshaya Tritiya that coincides with the Rath Yatra of Lord Jagannath and it takes around three months for them to complete the idol, with final touches.

6. A taboo tradition we all know through the movie Devdas

Traditionally, the making of Goddess Durga’s idol starts by taking a portion of the earth from the threshold of a prostitute’s house. It is believed that when a man enters a prostitute’s house, he leaves behind his humanity at her doorstep, as he only wants to fulfill his ‘animal’ instinct. This earth is thus considered sacred as it symbolizes man’s humanity. An important ritual of Durga Puja is the ‘Nabapatrika Snan’ (the b athing of the nine agricultural produces) on the dawn of Mahashaptami. 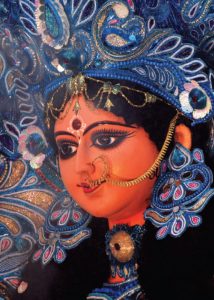 On the ghats of River Hugli, one is greeted by the quaint sight of priests dipping in the river, holding the auspicious banana tree. After this, the banana tree is worshiped with nine agricultural produces and amid the fragrance of incense sticks and resounding bells and conches, the banana tree is draped in the traditional Bengali white sari with a red border, making it look like a new bride.

The tree is symbolic of the agricultural cult that helps man to thrive. Alongside Kolabou, the priests also install the mangalghot (auspicious earthen pot), by filling it with the water from the river and then worshipping it with mango leaves, vermillion and a tender coconut – a symbol of fertility. 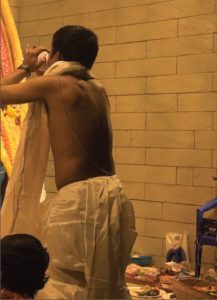 8. How long have we been celebrating this?

The oldest Durga Pujas of Kolkata are about three hundred years old. It is only at Serampore, 20kms from Kolkata, on the banks of River Hugli, that one can still witness traditional Durga Pujas that are more than five hundred years old. Shri Lal Gopal Panchanan had started one of the oldest pujas of Serampore at his residence. This was back in the 16th century CE and ever since it is being observed here (for 10 generations now)!

9. You really have to experience it to completely understand the essence of this amazing festival.