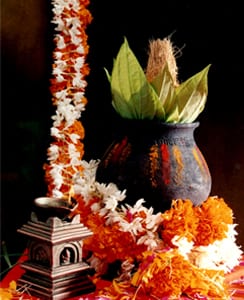 The Navaraatri festival is celebrated all over the country on a grand scale. However, each state has a different style of celebrating this triumph of good over evil. In Maharashtra it is a time when the rapid pace of life takes a break to pay tribute to the many forces that govern us as also an opportunity to build up camaraderie and positivism.

There are some events which are not merely festivals. They are sometimes occasions to rediscover our traditions, our beliefs and roots. The Navaraatra festival is certainly one such occasion. Next to Diwali, it is the most joyously celebrated festival in the state. Devoted to the worship of ‘Shakti’ (energy or power) or the Mother Goddess, it is celebrated in almost all parts of India but with greater fervour and zeal in western states like Maharashtra and Gujarat apart from West Bengal.

Navaraatra is probably the only Indian festival which celebrates a woman in all her roles. The supreme importance of women and their significant contribution in maintaining peace and order in the cosmos are facts acknowledged through this festival.During this vowed religious observance, women install an earthen or brass pot (ghatasthaapanaa) at a sanctified place at home. It is decorated with kumkum and marigold flowers. The pot consists of wet soil with germinated seeds, which together symbolize the Universe. A lamp is kept lit near the pot for nine days. The uninterrupted lit lamp is the medium through which is worshiped the radiant Adishakti or Mother Goddess. There is a ritual of observing fasts during the festival which involves certain restrictions regarding food choices for those who fast. The women have to follow a strictly vegetarian diet and cannot eat whole grains like wheat and rice in Maharashtra. There are daily prayers and the entire family participates in the same. Devi Mahatmya, Shree Sukta and other texts invoking the goddess who conquered the demons are recited.