Forts in the medieval period in Peninsular India were essentially defensive structures girding a settlement or a town. Their location gave the defender a strategic advantage over his adversary, especially if they were constructed on hills with steep slopes. In the case of land forts (also called Buikot in Maharashtra), sturdy walls and massive bastions, along with a moat girding its circumference was the preferred method of defence. The concept of the fort as a key element of defence held its own well into the twentieth century, especially if it commanded the countryside from a great height.

The introduction of gunpowder and the cannon in the late 15th century CE played a key role in modifying the architecture of forts. The first recorded use of gunpowder in the Deccan was when Khwaja Mahmud Jilani (also known as Mahmud Gawan), the chief minister in the court of the Bahamani sultan Muhammad III, used it to undermine the fort walls during his campaign against the Vijayanagar kings in Belgaum.

The following fort’s architecture and engineering reflected the need to have an effective defence against artillery, of which, the cannon was its earliest manifestation. The fort of Naldurg will be the first in the series of land forts, followed by Paranda, Vasai & Senji.

It is located off the Solapur-Hyderabad National Highway in the town of Naldurg, which forms part of Tuljapur Taluka in Osmanabad district. It is easily accessible by road from Solapur & Osmanabad.

Constructed on a knoll (small rounded hill) of basaltic rock, its majestic walls run along the contours of the hill and are presently mostly bounded by the waters of the Bori River.

The fort’s beginnings are quite obscure. It is believed that the structure was constructed by one Nalaraja, after whom the fort is named. We do not find any evidence of the same in texts or inscriptions. Neither is the fort mentioned in the chronicles detailing Muhammad bin Tughluq’s campaigns in the Deccan. There are reasons to believe that there was an existing fortified structure whose evidence is scattered near the outer wall, the bastions and the main entrance. The Bahamanis, who declared their independence from Delhi, took possession of the fort in the years following Delhi’s receding influence in Deccan politics, in the late 14th century CE and rebuilt it.

Thereafter, the fort finds frequent mention in the prolonged dynastic squabbles of the Deccan, due to its location on the frontiers of the Adilshahi state of Bijapur and the Nizamshahi state of Ahmednagar, even attracting the attention of the Qutubshahis of Golconda. The fortifications and the structures of Naldurg owe much of their construction to the Adilshahis of Bijapur. Following the extinction of the Bijapur kingdom in 1686CE by Alamgir Aurangzeb, the fort passed into the hands of the Mughals. Post Aurangzeb’s demise in 1707CE, the process of splintering of the Mughal Empire gained momentum in the Deccan which finally resulted in the emergence of new regional powers; one of them being the Asaf Jahis of Hyderabad, whose founder Nizam-ul-Mulk Asaf Jah, the Mughal subedar (Viceroy or Governor) of Deccan established his rule in 1724CE.

The fort now had a new owner, the Nizams of Hyderabad. Thereafter, with the ascendancy of the English East India Company in the first half of the 19th century, Naldurg became the regional headquarters of the British provincial governors, following an agreement with the Nizam in 1853CE, to cede present day Osmanabad district to the British.

An Englishman with multi-faceted talents, Colonel Phillip Meadows Taylor, was one of them. He made the fort his centre of operations in and transacted all matters of state from here. A prolific writer, painter, and an archaeologist, he has left behind some vivid memories of the fort, which he describes thus “Along the crest of the cliff on three sides ran the fortifications, bastions… firmly built of cut and dressed basalt and large enough to carry heavy guns”

Highlights to look out for! 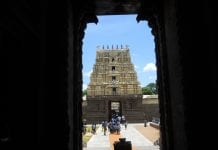