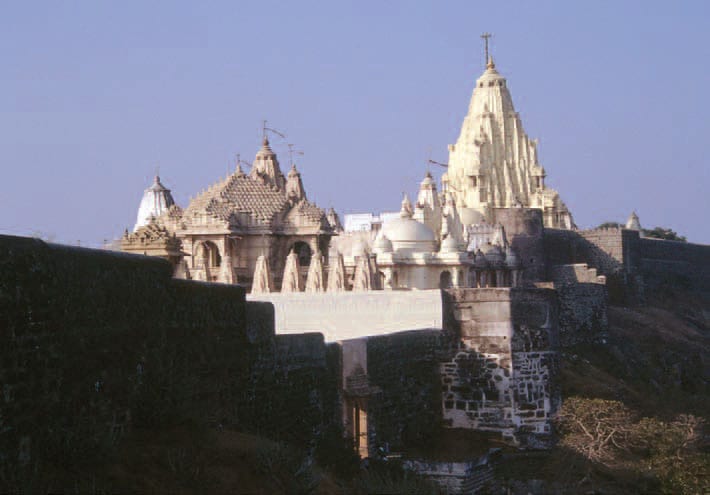 It is believed that the Shatrunjay hill of the Palitana district of Gujarat was where Lord Adinath, the (messenger) of the Jain religion, attained his salvation. In memory of this epic moment, his son, Chhatrapati Bharat, the King, laid the foundation of the very first temple on top of the hill. As years went by and tirthankar after tirthankar spread a new philosophy of peace and non-possessiveness across the nation, so did his aspiration grow to build temples on the pious hill. 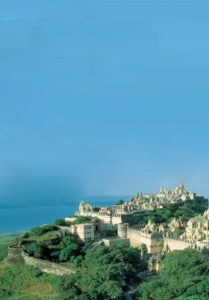 And so, in a span of almost 900 years, hundreds of white ivory spires emerged on top of the Shatrunjay hill and transformed it into the place of pilgrimage that every follower of the Jain religion must take at least once in his lifetime to attain the Bhavya status – a stage when you are considered fit to attain salvation.

What lies on the peaks of the Shatrunjay hills today, is nothing less than a modern-day miracle. From a distance, it appears as if innumerable marble miniatures are standing at attention and craving to touch the blue limitless sky. On the southern end of the hill, the Shatrunjay River flows with calm continuity.

If pilgrims come here to connect to their spiritual side, for others it is indeed a gateway to understanding the religion, art, and architecture of the peaceful liberators.

The resurgence of Jainism in 6th century BCE is seen as a reaction to the predominant religious system known as Brahmanism, which used rituals and animal sacrifices in religious ceremonies.

The first of the tirthankars was Lord Adinath also known as Rishabhdev and the last was Lord Mahavira. The Shatrunjay hill temples of Palitana are where one can see the idols of all the twenty-four tirthankars. Positioned in a seated posture, the idols imbue the Jain philosophy of peace and spiritual vitality with hands in dhyanmudra (meditation), and eyes reflecting the attainment of enlightenment. With minimal anatomical details and greater emphasis on the idea of spiritual bliss, all the idols look identical. 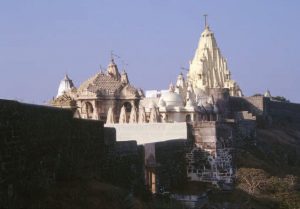 For visitors and devotees alike, the ascent to the hilltop usually begins before daybreak. In the wee hours of the morning, when the sun is yet to rise from its slumber, it seems easier to climb the 3764 steps and also be in time for the daily rituals at the summit of the temple.

It is usually with great fanfare that the idols are bathed everyday and purified with water, milk, honey and sugar – a ritual that the devotees too can take part in, wearing appropriate garments. The temple clusters have been divided into nine principal enclosures called as the tunks, each named after its principal benefactor. Standing more as monuments of history than religion, these tunks have many common elements and yet each one appears to have a distinction of its own. 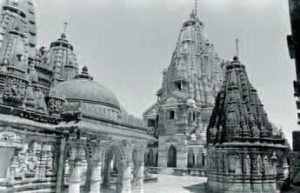 The rare display of artistic finesse reflected in the intricate designs that extend from steps to ceilings and the sensitivity of architectural precision transform this space into perhaps one of the largest open air museums of the Jain religion.

Holiest of the Holiest

The holiest temple among the cluster, according to Jain pilgrims, is the Adishwar Bhagwan temple dedicated to Lord Adinath. This 12th Century temple is a two-storied structure with the marble image of the deity bedecked with gold ornaments and studded with jewels. 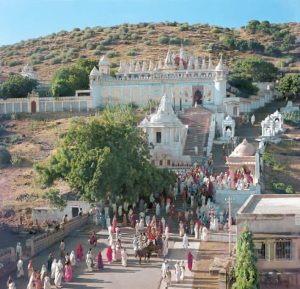 With its façade, carved with the nine symbols of Jain tradition, and ivory spire soaring high above all others, the temple is hard to miss. What is interesting to note is that while most temples have the principal deity as Lord Adinath, the artistic impressions vary, giving them their unique identity. For example, the Chaumukhi temple becomes noteworthy because of the quadruple image of the tirthankar gazing in all four directions. Symbolizing his first sermon after the enlightenment. The idol at the Nadishwar tunk, on the other hand, sits amidst a spectrum of colour reflected on it from stained glass windows.

The base of the hill has a shrine of the Jain Agam scriptures, and other shrines with holy footprints of Lord Adinath as well as other tirthankars and their followers. There are also several kunds (water bodies) like the Suraj Kund, Bhim Kund and the Ishwar Kund. For those interested in knowing more about the religion of Jainism and its passage through history, there is even a Jain museum located on the lower reaches of the hill. 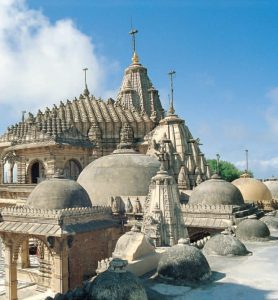 A place carrying many legends

There is the serpentine river Shatrunjay flowing in the distance with the entire Gulf of Cambay in sight, like a eyes. A fascinating piece of information that many believe to be true is that in addition to being a Jain pilgrimage site the ancient hill is also the place where the Pandavas attained their salvation. Some devotees believe that Krishna frequented the mountains quite often and performed a number of austerities in one of the caves here.

Consequently, there is a temple dedicated to the Pandavas located behind the Chaumukhi temple. This shrine has the idols of the five Pandava princes along with Draupadi and their mother, Kunti. Of the numerous Hindu temples in India, this too is thus one of the most revered. 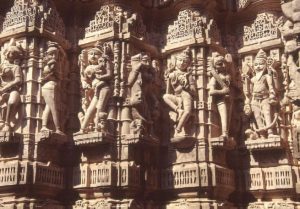 To gain that status, many perform the circulatory pilgrimage of the mountain that may be of 1.5 kos (4.8 Km), 6 kos (19.3 km) or 12 kos (38.6 km). These yatras (pilgrimages) are considered to be necessary to help them get rid of the evils of their past deeds and make the journey to Nirvana (salvation) more rapidly. 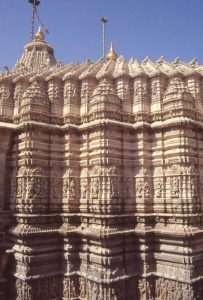 Like the reincarnations that humans believe in, the Shatrunjay hill temples too have changed their appearances and have been rebuilt, renovated and restored a number of times in history. Since the 11th Century CE, when the temples were first built, Palitana has had a history of marauding armies and invasions that have defaced the temple town. But, like the mythical bird that rises from its ashes, the temples too have risen bigger, brighter and holier than ever before. 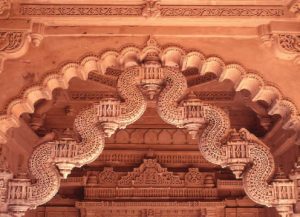 Jains truly believe that these shrines will stand every wrath that Mother Earth or human hands are capable of inflicting on them, retaining their eternal pathway to reach a pure end. As the sun sets behind the hills, the holy abode is left to the Lords as devotees; tourists and even the priests come down from the shrines.

As you look back and see the marble marvels, it seems apt to call Shatrunjay hill a celestial entity on Earth that Gods have chosen as their abode to rest and help those in search of peace, harmony and sanctity of the soul.