Pen, with its name derived from the Marathi term ‘pene’ which means a place to rest, turns into a zone of frenetic activity as the Ganesh Festival inches near. This is because it is here that the best idols of Ganesha are made with craftsmanship that can be traced back to several generations When families set out to choose a Ganesha idol, few are aware that the idols are produced in Pen, the chief centre of idol-making in Maharashtra. Located on the Mumbai-Goa highway, in Raigad district, 83 kms from Mumbai, Pen is the home of Lord Ganesha. It is here that the clay and Plaster of Paris (PoP) idols of Ganesha are created throughout the year. Here, making Ganesha idols is a passion, a tradition and a thriving industry. Idols marked ‘Made in Pen’ enjoy a special prestige and command higher prices than those crafted in other places. Most of the households here are engaged in some way or the other in the Ganesha industry. Over a quarter of the Pen idols wing their way abroad every year while the rest find their place in discerning homes and in pandals across Maharashtra during the ten-day Ganesha Chaturthi festival. The Pen Ganesha is also in demand in Delhi, Calcutta, Chennai, and even in the US and the UK. An idol made here is much coveted because of its aesthetic appeal – serene expression, poise, grace, subtle shading of colours and a good finish. When one strolls through the lanes of Pen, one finds here a beehive of frenetic activity. The karigars (craftsmen) are busy – some kneading clay, some moulding images, others colouring them, and so on. 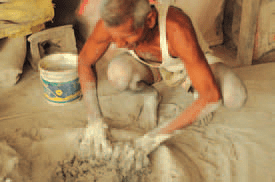 Another encouraging thing is that among the workers, many are women. It is also interesting to trace how Pen came to be the abode of the idols. History has it that the Kolhatkar family of Pen was related to the Peshwas of Pune. They were the worshippers of Ganapati and the festival of Ganesha Chaturthi was celebrated on a grand scale at Pune by the Peshwas. Since a majority of the families of Pen were Brahmins, the festival had a firm footing at Pen also. When Lokmanya Tilak took the Ganesha festival out of private worship into the domain of public festivity in the 1890s, some of Pen’s artisans shifted their skills to making idols for the Ganeshotsav.

In those days, making of idols was a pure art. The clay would come from Mumbai and the idol would be sculpted after months of work.It was sold locally under a barter system for a few kilos of rice, with no money exchanging hands. The art of creating the images out of simple clay has been acquired by the present generation of craftsmen from the knowledge handed down to them. The images of Ganapati were prepared about a century ago out of grey clay available in the nearby hills. The colours used then in painting the images were also procured out of black soot, lime, turmeric, flowers of the Pale trees, etc. For polishing the images, the leaves of trees such as Sag (teak wood) and Karate were used.

The clay available at the local hills was, however, not of a superior quality. Therefore, this began to be sourced from Mumbai where clay obtained from Gujarat would be sold by the merchants at throwaway prices. This clay was most suitable for the Ganapati idols. At that time, there were no roads linking Pen with Mumbai. Therefore, the clay was transported in boats from Mumbai to Antora Port which is only about 1.5 miles away from Pen. The commercialisation of the Ganesha industry began in the 1970s. The opening up of the Thane creek bridge was an important event. Suddenly access to Pen was no longer a problem. The ‘shadu’ or refined clay was now brought from far-off places like Bhavnagar and Surat and the idols become a marketable commodity.

The Ganesha idol industry in Pen has also witnessed pioneering turns over time due to enterprising craftsmen. One of such leading idol makers was Bhikaji Krishna Deodhar who turned to making the Ganesha idols after his traditional family business of making Maharashtrian pagdis (headgear) became slack. Meanwhile, the search for new material led N G Deodhar to use Plaster of Paris in place of clay which, however, was only used for those idols bought for decoration and not for worship during the Ganesha Festival. What is unfortunate though is that the diminishing number of skilled craftsmen has resulted in the increasing use of PoP instead of clay. Another factor contributing to this shift is that the clay idols cannot be of more than two feet in height while the demand is always for huge
idols, especially by the Ganesha mandals.

According to Shrikant Deodhar, president of the Pen Murthikar Sanghatana (organisation of idol makers), there are 22 to 25 steps in the preparation of a single idol. Above all, Pen’s craftsmen are known for painting the Lord Ganesha’s eyes in such a way that the idol seems to come alive. There are presently over 25,000 craftsmen and about 550 workshops in Pen taluka that together produce up to 7 lakh Ganesha statues with an annual turnover of nearly Rs 6 crore. However, this cottage industry is now under threat. “Workshops are now coming up in other towns too. More disconcerting is the fact that idols made elsewhere are now being sold with the ‘Pen’ tag and since they do not match our craftsmanship, our reputation is being spoilt,” Deodhar says.

Therefore, to be able to give the Pen idols a brand value, the Pen Municipal Council has recently taken steps to provide wider exposure to the rich quality of craftsmanship which the sculptors possess. One such project has led to the setting up of a Ganesha Idol Museum & Information Centre to enable visitors and tourists to know and understand in detail the art and process involved in making the clay and PoP idols.