Once upon the 12th century

In the 12th century CE, Kalhana, the famous historian-poet, wrote in his Rajtaringini (1148-49 CE) about many grand stone temples built in Kashmir during the medieval period. Of course, much has changed since then as most of those magnificent structures have either vanished or are in ruins due to vandalism, nature’s fury and just the poor quality of the materials that had been used.

However, a few still stand in different states of preservation at places like Martand, Avantipur, Pattan, Buniar, Pandrethan and Payar, reflecting not only the remarkable temple construction activity that once existed in Kashmir but also showcasing a distinct architectural style. This style, while being inspired by foreign elements (as Kashmir is strategically located on one of the arteries of the ancient Silk-Route), also assimilated the essential features of indigenous temple architectural styles.

The Kashmiri-temple style, which attained maturity in the elaborate temples like Martand, Avantiswamin, Avantisvara, Shankargaurishvar and others, had many characteristic features. All of them were located inside a stone-paved rectangular courtyard, surrounded by a range of small cells fronted with a colonnade (row of columns).

Each of the cells stood on a raised base and was designed as small temples by themselves, each with a deity placed on a pedestal. This layout is believed to have been influenced by the Greek architecture and the Gandharan Buddhist monasteries.The praveshdwara (gateway) to the temple complex was constructed as a prominent and imposing structure that matched the size of the main shrine. It was built on a raised platform and had two sets of staircases, one leading to it from outside and the other descending to the temple courtyard. 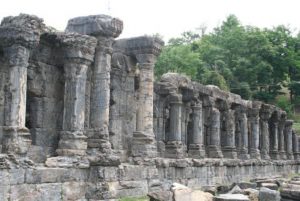 The staircases were flanked by a plain slope attached to sculptured sidewalls. The praveshdwara was further divided into two chambers by a cross wall with a rectangular opening in the middle, allowing one to enter the temple courtyard.

Similarly, the main shrine was also built on an adhisthana (raised platform) with a single or double base, with the staircase leading to the adhisthana flanked by an un-carved incline. The main shrine consisted of a single square chamber, which was the garbha-griha (sanctum-sanctorum) with or without a small mandapa (hall in front). 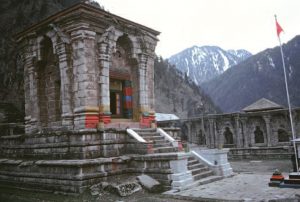 Externally, the design of the sanctum was based on a tri-ratha (triple projection) plan. Its external walls had trefoil arches (three lobes divided by cusps) enclosed in steep triangular pediments. In addition to the main shrine, other subsidiary shrines were also built inside the temple courtyard. 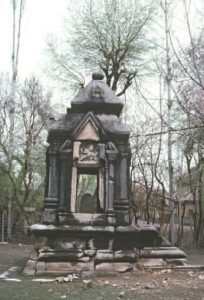 They were decorated with miniature shrines often representing the elevation of the temples itself – sculptural reliefs, geometrical and floral patterns, rows of geese, rosettes and kirtimukhas. The first and most important phase of the temple construction in Kashmir took place during the stable and prosperous reign of the mighty ruler Lalitaditya (724-760 CE) of the Karkota dynasty.

What was? What’s left?

Kalhana describes at least four magnificent temples in his capital, Parihaspura. Sadly, all these – Parihasakeshava, Muktakeshava, Mahavaraha and Govardhanadhara – have been reduced to their plinth level, surrounded by heaps of rubble. 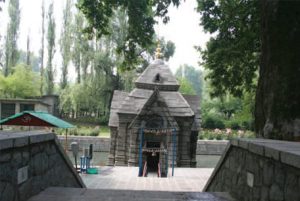 If these temples were intact today, they certainly would have been the grandest in Kashmir. That status rests with the Martand (Sun God) Temple, also built by Lalitaditya in the 8th century CE on the Karewa (plateau) of Mattan, ten km from Ananatnag. 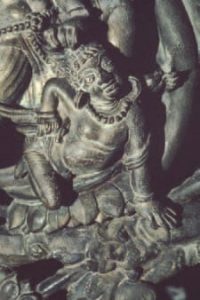 tic mountainous backdrop, the temple overlooks beautiful plains before it, set as it is between the two contrasting physical features with its characteristic grandness, simplicity and unity of style.

This harmony of design has prompted art-historians to regard Martand as the inspiring model for temples built in succeeding ages in the valley. The ruined temple stands in a rectangular courtyard (80 m x 60 m), the biggest amongst the extant temples, with a huge praveshdwara on the western side of the courtyard. It is surrounded by eighty-four cells, all with huge columns standing in front of them. 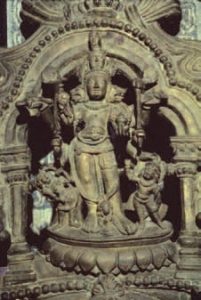 Though weathered, some of the reliefs still showcase the beautiful sculptural art of medieval Kashmir. The river-goddess Ganga, carved on the northern-internal wall of the antarala, immediately draws the attention of the visitor with her graceful posture. Standing on makara (her crocodile mount), the Goddess is flanked by two attendants and carries her usual emblems – a stalk of lotus and a water pot – in her hands.

Today, this fine sculptural art has crumbled because the poor quality of the stone used was unable to withstand the constant exposure to the natural elements. A few still stand, like the sculpted relief depicting Kamdeva (god of love) sitting with two of his wives (Rati and Priti) on the northern sidewall of the adhisthana of the main shrine, which is an excellent example of the fine art of Kashmiri artisans. 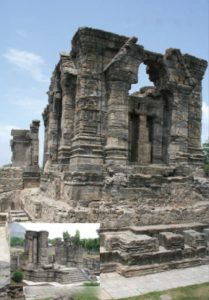 The third important temple-building phase took place in the 10th century CE, during the reign of King Shankaravarman, when three Shiva temples were built in Pattan, located some thirty km west of Srinagar. The remains of only two of these, namely Shankargaurishvar and Sugandhesha can still be seen. Pandrethan temple, dated 10th century CE, is located in the present cantonment area of Srinagar at the site of Puranadhisthana (old capital), denoting the ancient capital Srinagari, believed to be founded by Emperor Ashoka. Payar temple, dated 11th century CE, is located twenty km west of Avantipur. Though similar in design to the Pandrethan temple, it is smaller. Both these temples are of the mandapa type (open on all sides), unlike the bigger temples whose sanctum had only a single opening.

Shiva is the presiding deity of both these temples;  the temples at Pandrethan and Payar are unique treasures, as their intact roofs, a rarity in Kashmir, give specific ideas about the roofs of all other Kashmiri temples. The straight lined pyramidal roofs of these temples are divided into two sections with small projecting trefoil niches decorating each of the four sides of the upper section. Such pyramidal roofs are imitations of the earlier wooden houses and temples of Kashmir, designed to prevent the accumulation of heavy rain and snow.

Though the topping element of the Pandrethan temple is lost, it is intact in the case of the Payar temple, in the form of an amalaka (ribbed melon). The inclemency of time persists, sparing sometimes the creative brilliance of ages past, leaving behind remnants in stone of the magnificent medieval temples of Kashmir, organically integrating varied traditions, but keeping alive an unbroken link with their indigenous past.