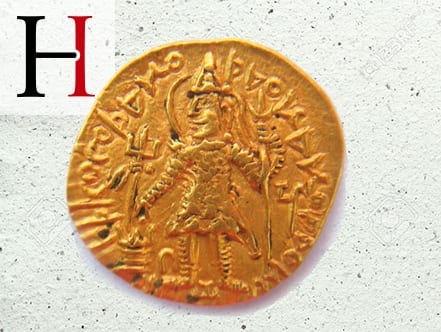 Go cashless, we’re told. But, this is about when the world was “cashless”.

When the disadvantages of the barter system were realized and a new common material was fixed as a medium for the exchange of goods, metal was preferred to others. Sanskrit and Prakrit literature gives us an insight into the coinage systems used in ancient India. Literary references mention various names of coins such as shatamana, padas, nishka, hiranya panda, karshapana and others.

The oldest coins we found

The actual evidence of the earliest coins in India starts appearing from c. 6th Century B.C. This is also attested by the Buddhist Jataka tales. These silver and copper coins of various sizes, found all over the country, are known as the Punch Marked Coins (as the technique of their manufacturing was punching).

Legend and portraits appeared on coins in c. 2nd Century B.C., issued by the Indo-Greek kings. These kings were actually the descendants of the provincial governors whom Alexander had appointed to look after the conquered territory in India. They became independent after his death and initially ruled over Bactria (parts of modern Pakistan and Afghanistan) then later on over the North Western parts of India. On the obverse of these coins the legends are generally in Greek script and Greek language. On the reverse the same legends are given sometimes in Brahmi or sometimes in Kharoshthi. Such coins using two scripts and two languages to convey the same information have provided a major clue for the decipherment of the two forgotten ancient scripts of Brahmi and Kharoshthi.

Gold was used by many rulers for national and international trade and usually silver, copper and bronze were used at the regional and local levels. Along with these metals, alloys of some metals were also used to mint coins. These findings throw light on development in the fields of metallurgy and technology in ancient India.

Why are these coins important to people who aren’t pirates?

Symbols, pictures and portraits on the coins have been used to a great extent to understand the socio-religious conditions in ancient India. For example, the Kushanas (who ruled over the northern parts of India from about 1st Century A.D. to c. 3rd Century A.D) were the first rulers in the history of India who issued gold coins. It was during the reign of Wima Kadphises that gold coins were minted.  His devotion to Shiva is evident by the fact that the reverse side of his coins bear the portrait of Shiva. This is the earliest depiction of Shiva in human form with four hands.

And though the Kushanas issued gold coinage on an extensive scale, the most beautiful issues from the artistic point of view, were brought out by the Gupta emperors, who ruled over a major part of India from c. 4th Century A.D. to c. 6th Century A.D. These coins are found on a large scale all over North India. On one side of these coins, the kings are shown in various activities like playing a musical instrument, slaying a tiger or lion or riding a horse. What is important is that the legend is written in the Brahmi script and the contemporary classical Sanskrit language. The metrical compositions on the obverse generally record the king’s achievements on earth and the attainment of heaven in future through his merits. Figures of deities like Durga, Ganga and Lakshmi are also featured on the reverse. More gold coins than those of silver and copper have been found suggesting it was a prosperous period.

The coming of the Muslims into India brought an altogether new look to coinage in the country. As the representation of figures was not acceptable to Islam, Muslim rulers introduced inscriptions in Arabic or Persian script. Mahmud Gazni, who invaded India from 1001 A.D. to 1021 A.D., issued coins with the Kalima in the Kufic script( Kufic is the name of the earliest form of Arabic script)  on one side with the  translation of this in Sanskrit language and Sharada script on the other.

When Akbar came to power, 1585 A.D. he issued a new variety of coins known as the Ilahi 1585 A.D. The fact that he was a liberal ruler is borne out by his coins. The most interesting type of coins issued by Akbar is generally known as the ‘Rama-Siya’ type, in the beginning of his fiftieth year as emperor. These were gold and silver coins bearing the effigies of Ram and Sita with the words ‘Rama-Siya’ in the Nagari script.

In the 17th century Shivaji Bhosale (1630 to 1680 A.D.), established his kingdom in Maharashtra. The Maratha power was a great challenge for the Mughals. Shivaji issued gold as well as copper coins. His gold coins are known as Hon and the copper coins are known as Shivarai. On one side is ‘Raja Shiva’ on the other side ‘Chhatrapati’. A similar variety is also found in silver, but here the legend on one side is ‘Raja Shiva Chhatrapati’ and on the other is ‘Jagadamba Prasanna’ (such coins are extremely rare).

Even though we are now in the 21st Century when currency notes and coins are being replaced by Credit Cards, the enigmatic wonder of old coins lingers, bearing with it the story of times that have gone and how the world might have been.