The Chandellas ruled over a region once known as Jejakabhukti (Bundelkhand of the present day) from circa 830 CE to 1302 CE, according to more than sixty inscriptions that remain. Their origins were humble; it appears, inspiring them to glorify themselves in these inscriptions by tracing their descent from the Moon.

Appeared out of Nowhere?

Chandratreya, an adopted clan-name of the family occurs in the epigraphs after the name of the sage Chandratreya. He was supposed to be the progenitor of the family. The Khajuraho inscriptions of Vikram Samvat 1011 ( 953 CE) is the earliest available record which refers to the mythical origin of the family.

The Dudahi stone inscription of Devalabdhi records the name ‘Chandrella’. A legend recorded in the Mahoba Khanda of the 17th century traces the descent of the family directly from Chandravarman, born to the Moon-god and the Brahman widow Hemavati. This, however, does not figure in the epigraphs. But it does give us a clue that they followed the ancient practice of elevating the social status of the family which had humble origins.

Chandratreya, a sage, acquired great power and in his family was born Nannuka – the founder of the dynasty who was succeeded by his son Vakpati. His influence, along with that of his sons Jayashakti (Jejjaka or Jeja) and Vijayasakti, was felt in the Vindhya region. In fact, Jeja or Jayashakti was the first ruler of importance as the region was named after him. It was earlier known as Vatsa and after the 14th century as Bundelkhanda. Vijayashakti’s son Rahila (c.885 CE – 905 CE) built tanks and temples and performed charitable works.

Importantly, he embarked on a tradition of constructing temples. In fact, on the banks of the Rihalasagar tank at Mahoba he built a Siva temple in granite. Harshadeva, son of Rahila is to be credited with the construction of the Brahma temple on the banks of Khajurasagar.

Although according to some scholars it was not a temple but a memorial shrine. Yashovarma, one of the illustrious rulers of the dynasty, laid the foundations of greatness for the family. Visualizing an opportunity in the dismemberment of great imperial powers like that of Pratihara and the Rashtrakutas, he increased his power and prestige by engaging himself in military operations which enabled him to extend his territorial possessions. Very soon he conquered Kalamgar with ease and also vanquished the Kalachuris, defeating the Chedi king. He established his authority over the Ganga-Yamuna Doab.

In brief, it can be deduced from the details given in various epigraphs of his career, that it was marked with significant political developments. From the position of a petty subordinate ruler of Central India under the Pratiharas, Yashovarman not only liberated himself and laid the foundations of the independent Chandella kingdom but the Chandellas under him also played an important role in the politics of North India.

A Ruler with many qualities 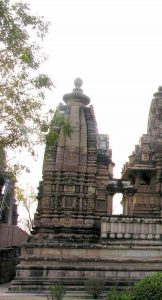 He was not only a military genius but also a good administrator who introduced the system of administrative bureaucracy. Besides this, he is acclaimed as a great b

uilder who is credited with the construction of a big tank and of the magnificent Lakshamana, a full-fledged Panchayatana temple (a complex of five shrines wherein the main shrine is dedicated to one deity and four more to four different deities) dedicated to Vaikuntha Vishnu. The golden pinnacles of the temple of Vishnu illuminated the sky and became, it is said, the object of attraction for even the inhabitants of the heaven.

The brisk temple building activity, keeping the family tradition alive continued and became the hallmark of the regime of Yashovarman. Of the two grandiose temples at Khajuraho the one known as Lakshmana was built by him. It is in a way a noteworthy specimen at the site as it is one of the two panchayatana variety, the other one being that of Vishvanatha.

It houses a typical multiple faced image identified as Vaikuntha. This he obtained from the Pratihara ruler Devapala boasting a grand victory over him and proclaiming the supremacy of Chandella power. This magnificent Lakshmana temple is a beginning of the Nagar style of temple architecture at the site. It is encrusted with eye-catching sculptures both of divinities as well as celestial beings and is not far from the old Shivasagar tank. Though the installed deity in the sanctum is variously known as Lakshmana, Ramachandra, or Chaturbhuja, the temple is popularly known as Lakshmana and the deity iconographically identified as Vaikuntha-Vishnu. 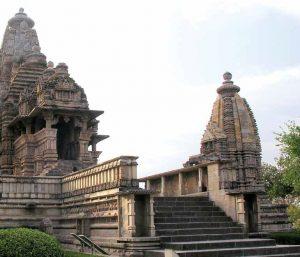 This is a four-faced image of Vishnu known as Vaikuntha. The central face is Vasudeva which is flanked by that of Sankarshana (Lion) and Pradyumna (Boar) and has Aniruddha (horse) at the back. Dhangadeva (Dhanga), son of Yashovarman succeeded him in 900 CE and reigned up to 998 CE. The inscription tells us that he was blessed with 100 years’ life, hence his achievements in many fields. Because of his astute political insight, he got rid of Pratihara suzerainty, extending his territory from Vidisha to Gwalior and from Varanasi to the Narmada river in the south.

In the field of temple-building, he is known because of the Vishvanatha (Marakateshvara), a panchayatana temple that he built. During his time the arts flourished because of the stability and prosperity of the land he ruled. The inscriptions of 954 CE allude to his love and patronage of the creation and practice of art. 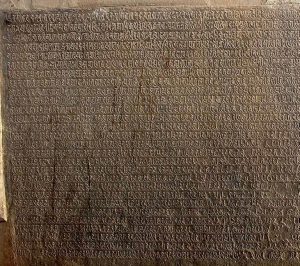 He was succeeded by his son Gandadeva who ruled for four years and is referred to in an epigraph in the Vishvanatha temple. Following him was his son Vidyadhara who is described as the most powerful ruler in the country in his time by Ibnul Athir, a contemporary Muslim chronicler. He was probably the first king of India who organized a powerful front of Indian princes against the invasions of Mahmud Gazni.

It is said that he mustered an army comprising thousands of cavalry and over one lakh infantry in addition to 746 elephants, forcing Mahmud to return to Gazni empty-handed. Apart from his successful military exploits resulting in the expansion of his kingdom his contribution to the art world with the construction of the grandest temple named Kandariya Mahadeva is everlasting. Epigraphs record him as a great devotee of Shiva. 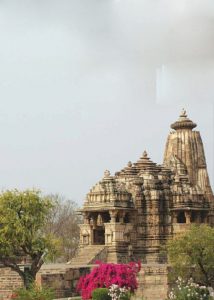 Jagavarman (1110 CE -1120 CE), grandson of Kirtivarman, was the next noteworthy ruler of the dynasty, constructing a temple known as Chaturbhuja. During his career, the original record of 999 CE in the Vishvanatha temple was rewritten as it had faded.

He was followed by Madanvarman (1128 CE – 1165 CE) whose reign brought prosperity based on widespread trade. He built temples in different parts of Jejakabhukti besides the one known as Duladeva at Khajuraho. After him came the uneventful reigns of Paramadeva (1165 CE – 1203 CE) and Trailokyavarman (1203 CE – 45 CE), followed by Viravarman (1245 CE – 1285 CE) who constructed lakes and temples merely to keep the dynastic tradition alive.

But with each successive ruler, the old grandeur and magnificence further dissolved…until the Chandella dynasty faded into the shadows of time. The images of Vaikuntha and Chatushpada Sadasiva and also the splendid temples like Lakshmana, the Kandariya Mahadeva and Vishvanatha constitute the precious contribution of the Chandellas to iconography and temple architecture respectively. Artistically speaking, there can be no two opinions regarding the contribution of the Chandellas.

In fact, it was so rich that their military, diplomatic and political achievements could not measure up to it. Their temporal victories may have faded but the magnificence of their temple architecture and expressive, proportionate, sculptures remain, with a grace and divinity that endures.