There are said to be more than a dozen major tribes which make up the entire Naga identity. These include the Angami, Ao, Chakhesang, Chang, Khemungan, Konyak, Lotha, Phom, Pochury, Rengma, Sangtam, Sema, Yimchunger and Zeliang. However, merges and splits have occurred and new formations have come about, far too complex for an outsider to understand and try to decipher. But, what is significant is that the people belong to the Indo-Mongoloid stock and are blessed with sturdy  dispositions, their ancestors, according to Sanskrit literature, being “hill men living on nature’s gifts, warlike and possessing formidable weapons.”

Each of the tribes and sub-tribes that live in this exotic hill State, can easily be distinguished by the colourful and intricately designed costumes, jewellery and beads that they wear. The traditional ceremonial attire of each tribe is in itself, an awe-inspiring sight: multicoloured spears and daos decorated with dyed goat’s hair, headgear made of finely woven bamboo interlaced with orchid stems and adorned with boar’s teeth and hornbill’s feathers, armlets of elephant tusks. In fact, in the not so distant past, every warrior had to earn the right to wear each of these items through acts of valour.

Putting the LAND in Nagaland 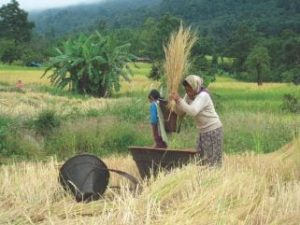 The use of the land underlies all other aspects of Naga society – not only to provide basic subsistence but also to accumulate sufficient surplus to afford the lavish sacrifices and feasts around which their life has revolved. There being no flat land in the region, two kinds of agriculture are basically practised to adapt to the hills and valleys: Jhum culture, which involves the felling and burning  of trees and shrubs to prepare the land mainly for dry rice, maize, millet, ginger, chillies and other crops; and the second being terraced wet rice cultivation. 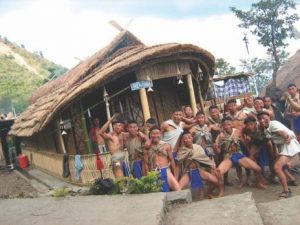 Generally speaking, the basic interest of every individual is the family, the clan, the Khel (part of a village), the village. Passionate attachment to one’s own land, the system of land tenure, the organisation of cultivation and the administration of tribal justice dominates the living experience.

This is a land of folklore passed down the generations by word of mouth. Here, music is an integral part of life and folk songs eulogising ancestors, brave deeds of warriors and heroes, and ancient love stories fill the everyday life. Indeed, this is a land where festivals are celebrated wholeheartedly. In fact, each tribe celebrates its own distinct seasonal festival with pageantry and a feast of music. These festivals are sacrosanct and participation in the celebrations is compulsory. Most of such occasions are connected with agriculture because it is the mainstay of Naga life. Although some religious and spiritual sentiments are interwoven into secular rites and rituals, the predominant focus of these festivals is to offer prayers to a ‘Supreme Being’ which has different names in different Naga languages. At these festivals, the spirits of Gods are propitiated by sacrifices. Feast giving hence becomes an important part of Naga life. Horns displayed on houses reflect status gained through feasting.

In spite of this, the great oral tradition of the Naga people persists and memory fights back and holds on to traditional values and beliefs. Temsula Ao, possibly Nagaland’s most eminent contemporary folklorist, academic and poet, writes, ‘the inherent instability of any oral tradition needs no great elaboration. In the context of the Ao-Nagas too, the inevitable variables in human memory and performance led to a gradual depletion of the literary contents and poetic language of the tradition. Added to this some inexorable facts of history further hastened the process of deterioration.’