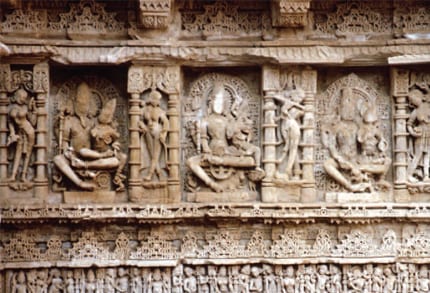 In the region of Gujarat and Rajasthan, the climate has traditionally been dry. Scarce rainfall, seasonal rivers, and a low water table have made water a significant life force. This is why, during the course of time, the simple village well, pond or reservoir developed into an inventive architectural form – the step well like the fascinating Ranki Vav.

One quadrant of a circular well was opened up and flights of steps were introduced from the surface of the ground right down to the water below. Sometimes, a pond was provided for between the stairs and the well at the end.

To solve the engineering problems, in excavating and building an underground structure in the sandy soil, pavilions were inserted at regular intervals in the stepped corridor. Long descending staircases, pavilions, reservoirs, draw wells – all these resulted in a unique structural form.

A step well consists of a series of solids and voids, or pavilions and corridor stages. In the dry and sandy soil of Western India excavators and builders of step wells faced great constraints. On the one hand, patrons who commissioned such monuments demanded imposing structures that were in keeping with their rich resources and grand ambitions. On the other hand, unstable soil presented its own hazards. After many experiments, the builders seem to have ingeniously resolved the problems of building large wells. 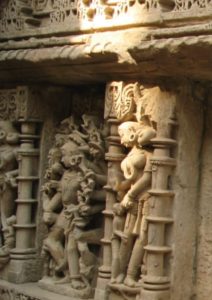 They dug a series of trenches, separated by balks or solid earth. The trenches, which were successively deeper, accommodated the flights of steps from the ground level down to the well; the solid blocks of earth marked the intermediate stages where pillared pavilions were accommodated.

Trench and pavilion alternated with each other. So, on those parts of the structure where two stages of the descent are joined, are images that combine two or more divinities. The conjunction of the images takes different forms. In the simplest formula, a divine couple embraces, or two gods who naturally belong together are also paired together, such as two out of the eight Vasus. 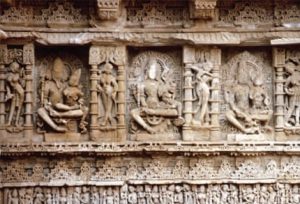 The Architecture of Ranki Vav

The Ranki Vav or the Queen’s step well at Patan, Gujarat would certainly be a good example. Of an imposing size, nearly 220 feet long from east to west, 60 feet at the maximum, it originally had seven floors and four pavilions punctuating its long stepped corridor, making it the largest and grandest by far.

Its draw well was sunk to a depth of over 100 feet. Built by Queen Udayamati in memory of her departed husband, the Solanki King Bhimadeva of Gujarat, in the latter part of the 11th century, the step well is one of the largest in all of India and certainly the most ornate even in its present damaged state.

What sets the Ranki Vav apart from all other step wells is the fact that it has been decorated with several hundred large sculptures depicting gods, goddesses and other semi-divine beings all over its walls, not only on the side walls of the corridor but along the inner wall of the circular well too.

They represent many of the divinities of the Brahmanical pantheon—Vishnu, Shiva, Brahma, Ganesha and Devi, or the Great Goddess, in many forms, the Regents (dikpalas) and the Mother Goddesses. Apart from the members of the Hindu pantheon, other mythological beings such as river goddesses, Apsaras, the eight Vasus and Rishis are also represented. 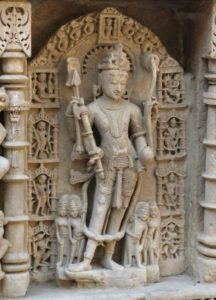 This is a memorial step well and was intended to create religious merit (punya) for the departed. Stepped wells of this nature are India’s unique contribution to the world’s architectural heritage. Even though they are sacred, because the memory of the departed is sacred, they are not considered to be temples of any sort.

It is an overwhelming experience, standing at the entrance of the Ranki Vav, and looking beyond the greatly ruined first stages towards its better-preserved interior with its rows of sculptures. There are three distinct ways in which the builders expressed with originality the nature of the monument: the images of the goddess Parvati performing penance; sculptures that may be called “the images of conjunction”; and the representations of a class of celestial beings, the eight Vasus.

The builders had a clear conception of what they were doing even though to us today their intentions may not be so obvious. Despite the damage, the step well has as many as fifteen images, of the goddess Parvati performing the asceticism of the “five fires” (panchagnitapasya), that are still intact. 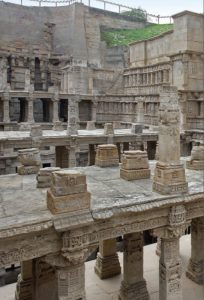 Finally- The Story of Ranki Vav

The myth of the divine penance has a poignancy of its own. While Parvati performed her austerities after her death separated her from her husband, Queen Udayamati constructed her step well after she and her husband were separated by his death. The parallel in both cases is provided by the death of one member of the couple.

Just as, in primordial time, Sati undertook austerities to bridge the gap between herself and Shiva, so Udayamati carried out her act of piety, by building a memorial well- to bridge the distance that death had created between her and her departed husband. It is well known that in Puranic Hinduism such purta acts as the digging of wells, reservoirs, watering places are considered as meritorious.

The myth of Parvati’s penance is well known. Born as Sati, daughter of Daksha, she defied her parents’ wishes and married Shiva, the wanderer God who frequented cremation grounds, kept snakes and wild beasts as company and indulged in activities not sanctioned by ‘civilised society’. 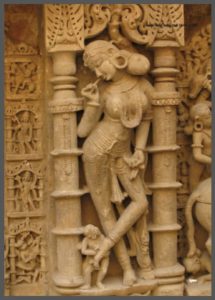 Because of this, she was rejected by her father. Once, when Daksha was performing a Vedic sacrifice, Parvati arrived, uninvited, and was insulted by her. In reaction, she threw herself into the sacrificial fire. She was reborn as the daughter of Himalaya, the Snowy Mountain, and performed the harsh austerity of the “five fires” in order to regain her life with Shiva, finally winning his hand.

In the course of time, Parvati came to be represented by a group of twelve goddesses, or rather twelve aspects of one and the same goddess. There were the twelve Gauris (Dvadashagauris) -Uma, Parvati, Gauri, Lalita, Shriya, Krishna, Maheshvari, Rambha, Savitri, Trikhanda, Totala and Tripura.

Worshipping these goddesses was popular among women. The Gauris’ blessings were invoked to ensure marital fulfillment by the woman for her husband and for his well-being and that of their household in general.

In the Ranki Vav, there are as many as fifteen sculptures of Parvati or Gauri, performing austerities. Some of them show the standard iconography, with the divine virgin standing on her mount, the iguana (godha), in the midst of four fire altars, and looking up at the burning Sun in the sky as the fifth fire. This form of self-mortification is called panchagnitapasya, “penance by the five fires”. 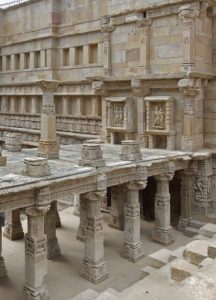 In one rare example, Parvati is even shown as lean, wearing a loin cloth, supporting herself on only one leg, thus mortifying herself even more harshly. Then there is the presence of conjoint sculptures at places where two structural parts of the stepped well combine.

The various representations of the Vasus in this monument also seem to serve the very purpose of commemorating the departed by employing the myth and its attending motif to reflect the theme of Moksha or liberation from the cycle of rebirths. 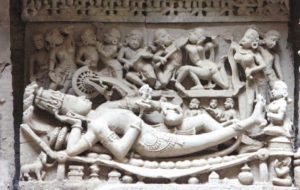 In Hindu mythology, the eight Vasus are Dhara, Dhruva, Soma, Apa, Anala, Anila, Pratyusha and Prabhasa. In a well-known myth in the Epic Mahabharata, the wife of one of the Vasus desired the sage Vasishtha’s cow; the Vasus stole the cow, for which they were cursed to lose their divine status and be born on earth as mortals.

King Shantanu, an ancestor of the epic heroes, was infatuated with the personified river Ganga, but she would marry him only if he consented never to question her actions. Born to Ganga, seven of the Vasus were consigned by the mother to the sacred river, to be liberated from their curse.

But when the eighth and last child was born, Shantanu could not remain a silent spectator; he questioned his wife about her action Ganga explained that her actions were in fact meant to liberate the Vasus from their mortal state and to help them regain their original heavenly condition at the end of their curse. She gave up the child to the father and because he had broken his promise she left him. The last surviving V 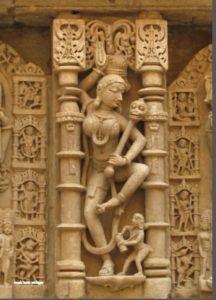 asu came to be known as Bhishma, the great epic hero.

Deep down inside Udayamati’s well, where the plain wall ends and the topmost and lowest of the seven courses of carvings begin, the eight Vasus are seated among other divinities. They have four arms, one pair of hands folded, heads bent reverentially towards the water, the other pair carrying a rosary and a pitcher.

They have bovine heads with horns. This ring of carvings is located at what would be the “normal”, or “formal”, the level of water in the well – any excess water would flow out into a tank provided for it in front.

This step well at Patan embodies living beliefs that lie at the very heart of Hindu tradition. Udyamati’s builder has given physical form to these beliefs as they reflect her experience of life and death, thus expressing, in the process, the larger interplay of the spiritual and temporal. Here, mud, stone, and water are aesthetically transformed into a drama of the divine, frozen in time.