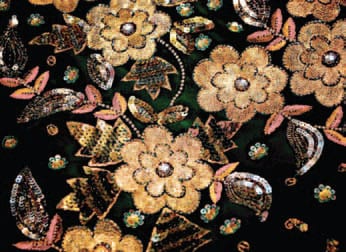 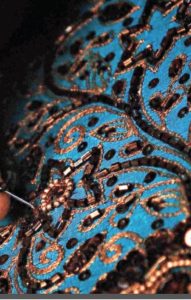 Even though Zardozi is believed to have its origin in Persia (Zar in Persian means gold and Dozi is embroidery), the use of gold and silver thread work, in fact, goes back to ancient India, finding mention in Vedic literature and visually evident in the figures that adorn the walls of the caves of Ajanta.

However, it was only under the royal patronage of the Mughal Emperor Akbar that Zardozi and Arri embroidery reached its zenith and was extensively used to enrich the garments of the court, wall hanging, palanquins, scabbards, regal sidewalls of tents and the rich trappings of elephants and horses. A closer look at the miniature paintings of the royal court of the Mughal era reveals the elaborate and highly refined floral motifs in gold, embroidered on the princely attire.

After flourishing seamlessly in the initial Mughal period, the craft declined during the rule of Emperor Aurangzeb when the royal patronage that had been extended to craftsmen was stopped. The onset of industrialization in the 18th and 19th centuries was yet another setback. 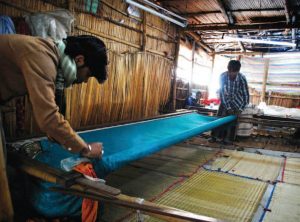 With the emergence of Muslim nobility in Bengal, the craftsmen found substantial patronage and settled down on the banks of River Hooghly, in the Uluberia and Ranihati area, naturalizing the Zardozi and Arri craft to Bengal. At present, over 75% of the population of Uluberia depends on this craft for their livelihood.

The majority of them are Muslim craftsmen who keep alive the heritage of their forefathers. While men work collectively in workshops, women practice the craft at home, between their daily chores. Sitting inside his damp workshop, Sheikh Mosibur Rehman; a fifth generation Zardoz (a Zardozi craftsman) nostalgically recalls how his forefathers were referred to as ‘gardeners of garments’, in praise of the intricate floral motifs they perfectly and painstakingly embroidered with their small crochet hooked needles. 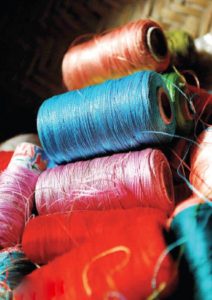 Traditionally, the art of Zardozi used only gold and silver wire along with precious gems and diamonds but with time, silk and other shining threads like dabkaa (a combination of gold and silk threads), kasab (silver or gold-plated silver threads) and bullien (copper and brass coated threads) replaced them. Precious gems have given way to sitaaras or metal stars, round sequins, glass and plastic beads, even though the process of embroidery remains the same. Unlike the opulent royal karkhanas (court workshops) of the Mughals, today, in the cramped workshops, the entire economics of the trade has changed, even though the effort remains the same. 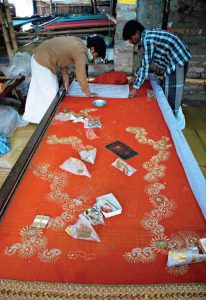 Azizul Shah, another Zardoz practicing the craft for over three decades says it takes almost twenty-five years for any craftsmen to gain expertise in zardozi art. This is the reason why, he says, that children start learning this art at a very early age – observing their family members at work.

The process by which arri and zardozi embroidery is done is quite intriguing. At first, the fabric (generally silk, velvet, brocade, crepe and georgette) is stretched taut over a frame called the adda and secured by a thick cotton thread, which gives it uniform tension. Then the embroidery design is drawn onto the fabric. Zardoz Sheikh Mosibur Rehman says that unlike its Persian counterpart, where only floral motifs and sacred Quranic verses enlivened the fabric, Indian designs tend to be more imaginative. Flowers, leaves and creepers have been widely used as design motifs since the Mughal era with birds like the peacock, parrot and pigeon being integrated much later.

As the craft travelled to the royal courts of Rajasthan, Marwar, Bengal and Gujarat, innovations took place and the design patterns became more geometric, merged with the floral themes. The process of printing the design on the fabric is also unique. After the images are drawn on a tracing paper, holes are pierced with a needle all along the lines. To transfer the design on to the fabric, a mixture of kerosene and chalk is made and rubbed with linen on the tracing paper. The liquid seeps through the holes and the design impression stays on the fabric. 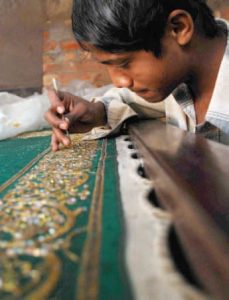 The real embroidery work then starts. The craftsmen sit cross-legged beside the adda with their box of colored threads, sequins and a needle with a hooked end. Both arri and zardozi follow the appliqué method of embroidery wherein the needle is pushed through the fabric from the top while the craftsman holds a retaining thread below the fabric, finally pulling it up with the hooked end of the needle. In this looped manner, the small yet fine stitches create a dense mesh of exquisite artwork. 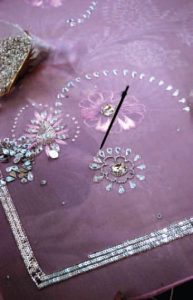 While arri looks like fine chain stitch, zardozi, on the other hand, has finer designs as while the hand above the cloth works the needle the hand below ties each stitch making zardozi products not only beautiful but also durable.

Even today, the embroidery work is completely done manually by the craftsmen, without the use of any machinery whatsoever. The work is so intricate that it takes almost two to three days to complete a six-meter sari with five or six craftsmen continuously working on it.

During the peak business season that coincides with Dussehra, Diwali, and Eid, workshops are crowded out with over twelve to fourteen craftsmen working on a sari for over eighteen hours at a stretch. For this sort of skilled and strenuous work, an expert earns about 18 an hour whilst an apprentice gets paid about 2 an hour.

Once the embroidery is complete, the thread is flattened out with a light-weight wooden hammer and the fabric is ready to be dispatched to the retailer. While a handful of craftsmen have small outlets in Uluberia, the bulk of the work happens mainly on a contract basis for cloth merchants elsewhere who buy the embroidered fabric and transform it into finished products like saris, kurtas, lehenga-choli, salwar-kameez or other home décor paraphernalia. 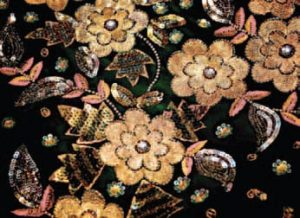 of royalty has passed, this creative skill has managed to not only survive but flourish, adapting itself to the needs of the market. By doing so, not only do the embroiderers have an occupation and a livelihood, but tradition is also kept alive and bolstered, giving Uluberia a significant position in the story of zardozi.