Amidst the chaos and turmoil of modernity, the human quest for inner peace has become more intense. The building of places of prayer and peace best epitomise this search. A good example of this is the architecturally innovative Great Stupa of Dharmakāya at the Shambhala Mountain Center, Colorado, USA which ingeniously integrates the traditional chorten (Tibetan Stupa) with a prayer hall.

Shambhala? Is that a real place? 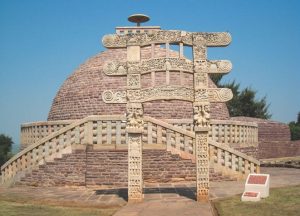 Shambhala is supposed to be a hidden kingdom which still holds the promise of sublime peace within its misty terrains. It is believed that only those with pure Karma will find their way to it. The story of this kingdom has been kept alive by Buddhist traditions of Tibet and continues as a recurrent theme in modern life today, representing a much-fantasized icon of eternal bliss.

“Eternal Bliss” or “Absolute Peace” is an abstract phenomenon which only the enlightened ones experience. And a Buddhist “Stupa” seems to have emerged as the finest physical symbol of this abstract phenomenon. Hence a complex symbolism is innate to various components of the stupa. The symbolism contains multiple layers of meanings, which, for the uninitiated, may appear to be too arduous to go through, but it may suffice to note that it is the sum total of the Buddhist philosophy comprising the eightfold path (ashtāngmārg), knowledge and enlightenment. 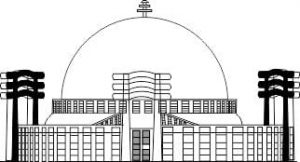 The stupa as an architectural form has evolved into many types: the dagoba (Sri Lanka), chorten (Tibet), wat (SE Asia) and pagoda (China, Japan). As an object of worship, a stupa is referred to as ‘Chaitya’.

All of these contain the same symbological themes. ‘Dagoba’ is a derivative of Sanskrit dhātugarbhā (the one with the seed of existence) and suggests various planes of meaning. Pagoda is similarly a derivative of Dagoba, formed by reversal of letters.

Schematically a stupa represents a microcosm, complete in itself. Each stupa is conceived to be at the centre (axis Mundi) of the macrocosm and hence it is in perfect consonance with it.

Structurally the elevation comprises of five components, symbolic of five elements, represented by proper geometric shapes. In Greater India, the elevation of the elongated bell-shaped stupa corresponds to the idealised proportion of the body of seated Buddha.

The base (medhi) may be a round or square platform that symbolises the ‘Earth’, the stable matrix of manifest existence. The terrace of the medhi provides for a circumambulatory path (pradakshināmārg) around the dome. 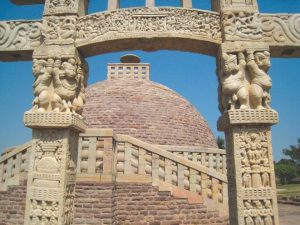 The next is the dome (anda) that signifies the sky and also the universal womb (garbha) containing the seed and the fructifying ‘Water’ (dhātu). On the top of the dome, in a small space specially created, rest the relics carefully deposited in a casket placed within caskets of different materials. The dome is also known as a bubble, perhaps reiterating to the viewer, the principle of “impermanence” as well as the “unbroken cosmic chain of resurgent life”.

A finial in the form of a square stone box (harmikā) protects the relic casket placed above the dome and represents ‘Fire’. In the centre of the harmikā stands a mast (yashti) that represents the ‘Wind’ or ‘Air’. The yashti supports an umbrella (chhatra) that denotes the ‘Space’ or ‘Void’.

The classic plan of a stupa as seen at Sanchi resembles a Swastika, the solar disc. The four gates (torana) at four cardinal points and the railing (vedikā), of course, demarcate the sacred from the profane but with exquisite sculptures on it, unravelling inspiring episodes from Buddha’s life. They certainly remind the viewer of the inconsequentiality of his own existence and the need of awakening to the ultimate truth – Nirvāna.

How does one decide where the Stupa will be constructed?

After Buddha’s death, many of his followers claimed his ashes and built a stupa over it. A solution was found by dividing the relics among eight kingdoms. The Pali canon, Mahaparinibbansutta gives a detailed account of the division. According to the text, those who were graced by a portion of Buddha’s ashes included King Ajatshatru of Magadha, the Licchavis of Vaisali, the Shakyas of Kapilvastu, the Bulis of Allakappa, the Koliyas of Ramagrama, a Brahmin of Vethadipa, the Mallas of Kusinagara and the Moriyas of Pipphlivana. A Brahmin named Dona carried out the task of dividing the relics and he kept the vessel for himself. It seems that the Brahmin Dona and the Brahmin of Vethadipa were one and the same person. 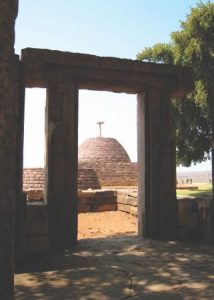 Eight chaityas, known as ‘Ashtmahāchaityas’, were erected on the eight portions. They came to be known as ‘Ashtamahāsthanas’. It may be noted here that places like Gaya, Varanasi and Sravasti do not appear in the list of Astamahāchaityas until later. The evolution of the cult of Astamahāchaityas saw the inclusion of Gaya, Varanasi, Sravasti, Sankisya, Rajagriha among the Astamahāchaityas as they were also associated with major events in Buddha’s life. These events were: His birth (Lumbini), Abhisambodhi (enlightenment at Gaya), Dharmachakrapravartana (deliver his first sermon at Varanasi), exhibiting supernatural powers (known as the twin miracles) to silence the six heretics (Sravasti-Jetavana), his descent from Trayatrimsha (33rd heaven) after teaching Abhidharma to his mother (Sankisya), averting the split in the Sangha (Rajagriha), meditating on the limits of his life (Vaisali) and  Mahaparinirvan (Kusinagara).

Before concluding one must note that in the course of time the Stupa evolved as representing Buddha as ‘Dharmakāya’ – a universal symbol of ‘Dhamma’ (the Ultimate Truth) and ‘Karuna’ (Compassion) that leads to absolute peace.