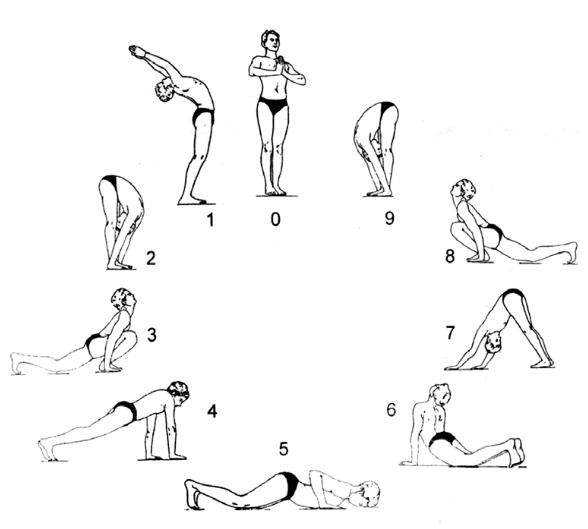 Surya Namaskar or salutations to the Sun is essentially the worship of the Sun God. The Sun is the source of all energy and a prayer to him every day, early in the morning is believed to bestow one with unlimited energy. We find mention of this practice in ancient Indian texts like the Rigveda, in the Chapter “Trucha – Kalpa – Namaskarah – Rugvediya Nityavidhi”, as also in the Puranas. Nityavidhi means tasks to be performed daily.

The Surya Namaskar accompanied by Aumkar (articulating the ‘Aum’) is an all round exercise which is believed to keep the body and mind in a state of well being.

Modern Sports and Medical Sciences relating to Health and Sports analyse benefits of exercises by calculating Strength, Endurance, Core stability, Elasticity, Flexibility of the body and Power of the mind. The Surya Namaskar exercises done with Aumkar are supposed to meet these Norms.

The human body has a network of various systems, which are interlinked and controlled by the brain. Everything is fine while the systems run smoothly. A healthy body is prepared to fight back in the case of an attack on its systems. Extensive research on the subject has proven that the Surya Namaskar effectively strengthens the efficient working of human body systems.

Sound frequencies generated by Aumkar are soothing for the body, vocal cords vibrate and speech quality improves. Done with full devotion, the Surya Namaskar exercise helps the body to withstand stress and strain of daily work with ease. If we trace the tradition of the Surya Namaskar in India during last four hundred years, clear references are available in Maharashtra, Madhya Pradesh, Gujarat, Andhra Pradesh, Karnataka, Tamilnadu, Kerala and Bengal.

Many Non-Governmental Organisations in India and abroad are dynamically working for the awareness of the Surya Namaskar. The Defense Department of India has taken up a Research Programme on the Surya Namaskar and the first report with positive results was published in April 2004. The Singapore Sports Council, where candidates come for training from all over the world, has accepted this exercise as a warm-up and cool down exercise after carrying out scientific measurements in May 2005.

It is believed that 20 minutes daily of Surya Namaskar can gain 20 more years of Healthy life.

What makes the Surya Namaskar an ideal exercise?