Sushruta was the first to classify surgical operations. He was both a practitioner and a teacher of surgery. His contribution to the medical heritage of not just India, but the World, is invaluable. Sushruta divides his Samhitaa into 120 chapters and six parts, covering all the branches of medicine, including hygiene, midwifery, ophthalmology, toxicology and psychosomatic ailments. Sushruta considers surgery the first and foremost branch of medicine and states:

Surgery has the superior advantage of producing instantaneous effects by means of surgical instruments and appliances. Hence, it is the highest in value of all the medical tantras. It is eternal and a source of infinite piety, imports fame and opens the gates of Heaven to its votaries. It prolongs the duration of human existence on earth and helps men in successfully fulfilling their missions and earning a decent competence in life.

He describes eight different operations for surgery like cutting, opening, scratching, piercing, inserting etc, and finally stitching up the wound. 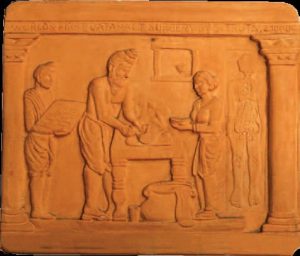 The fullness of the wisdom and skill of Sushruta can be best comprehended not through the fragmentary evidence of his life but by exploring the details of the text itself. In order to initiate this exploration, it would be worth briefly viewing some features of this Samhitaa.

For example, Sushruta has explained the technique of “yogyaa”, which means practicing the use of surgical equipment on non-human subjects like different fruits and vegetables (such as jackfruit, pumpkin, and cucumber), dead animals and artificial limbs created from wood and wax. This gives the practitioner mastery over surgical tools in order to prepare him to apply his skills to actual human beings. He believes that it is also necessary for a surgeon to have a thorough knowledge of internal organs. A corpse kept in flowing water for fifteen to thirty days is given to the disciples for dissection.

Knowing someone inside out, quite literally

Without the knowledge of Anatomy, it is impossible to become a good surgeon. In addition to this, Sushruta also refers to the basic precautions to be taken to avoid infection during surgery. To make sure that this is so, it is suggested that the operation is conducted away from the human settlement, in a safe and clean environment where plenty of water is available. 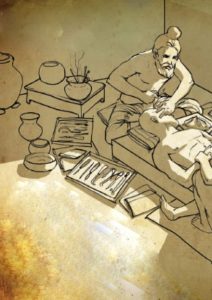 The text goes on to explain that surgical equipment should be cleaned and disinfected with the fumes of specific medicinal plants. Sushruta prescribes the use of metal needles and silk threads to stitch wounds. In fact, certain species of ants are also recommended for stitching internal organs like intestines. These ants should be handpicked and allowed to bite at the place that needs to be sewed.

Once they have done this, their bodies are to be severed, leaving their mouths closed on the wound. Also prescribed is the use of a strong alcoholic beverage to be used as a sedative before the surgery is performed.

To have a nose for something, you must have your nose in place

The great highlight of Sushruta’s surgery was the operation of rhinoplasty. The making of a new nose captured the imagination of the medical world and brought him fame as the originator of plastic surgery. A detailed description of nose, lip and ear surgery is also provided. Of course, these methods were not used for cosmetic purposes but primarily to join or reshape these organs in the case of natural deformity or injury. 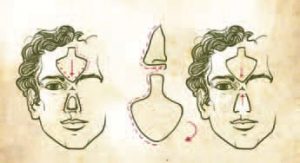 The Sushruta-Samhitaa is divided into two main parts – the Purvatantra and the Uttaratantra. It describes the yantras (blunt devices or tools used for removing a foreign body) and shastras (sharp tools used for actual surgery). One hundred and one yantras are included. Among them are svastikayantra and sandamshayantra (forceps), taalayantra (scoop) and others. Twenty shastras such as karapatra (Knife or saw), vriddhipatra (scalpel), suchi (needle), kuthaarikaa (axe-shaped knife), vrihimukha (trocar) and badisha (hook) are featured. He describes that a shastra “should have an edge so fine that it should divide the hairs on the skin.”

The Sutrasthaana discusses particular procedures such as Kshaarapaaka (the use of alkaline ashes of medicinal plants), Agnikarman (using a heated needle or other pointed objects for pain-relief), Jalaukaavacarana (using leeches to take out blood). 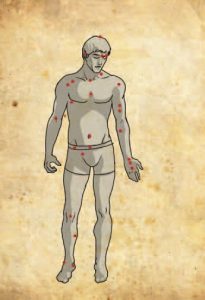 The Nidaanasthaana deals with the cause, progress, and diagnosis of many diseases such as sciatica, facial paralysis, piles, urine-stones, various skin diseases, ascites, tumours, sexually transmitted diseases, fractures and diseases of the mouth, tongue, teeth, and throat.

On the other hand, the Shaarirasthaana deals with the creation and function of the sharira (body). It begins with explaining the process of reproduction and leads on to discussing some diseases related to the reproductive system. The stages of pregnancy with reference to the development of an embryo are also examined.

His Research on Poisons

The Chikitsaasthaana elaborates the actual treatment of diseases that are dealt with in the sequence of the Nidaanasthaana. It begins with a discussion on preventive measures to be taken in the kitchen, especially for the king, to avoid getting poisoned and explains the two types of poisons – sthaavara (plants and minerals) and jangama (animals). Types of poisonous and non-poisonous snakes, along with the other poisonous animals such as scorpions, spiders, mice, and insects are described in substantial detail and treatment is suggested for a poisoned person with the help of mantras as well as with different agadas (medicines prepared from plants and mineral products).

But how elaborate was this Ancient Practice?

The Uttaratantra devotes 18 chapters to describing 76 different diseases of the eye of which 51 require operations. Sushruta is said to be the first surgeon to have removed a cataract. In addition to the technique of cataract extraction, Sushruta describes such modern concepts as antisepsis, anesthesia and post-operative care followed by diseases of ear and nose. The ill effects caused by alcoholism are also discussed.

The closing chapters are reserved for the 32 tantrayuktis (methodology of theoretico-scientific treatises in Sanskrit), basically taken from the tradition of the nyaaya philosophy. It is thought to be important to have knowledge of the nyaaya, which makes a physician able to diagnose and treat some critical cases that may not have been mentioned in the text.

So expansive, detailed and incisive is the Sushruta-Samhitaa that it is evident that it had originally stemmed from a truly enlightened mind, which had a deep and thorough understanding of the inner and outer reality of the human body and its very existence in the context of the seen and unseen world. It also reflects the extent to which the author has been tuned to the wider tradition he belongs to. Though Sushruta’s identity may be somewhat blurred, his legacy isn’t.