Kandhar lies about 50km south west of Nanded city, on the left bank of Manyad, a tributary of the Manjira which belongs to the Godavari system. It has been identified as one of the capitals of the Rashtrakutas. Although an insignificant town at present, it must have been an important city in the ancient past. In fact, it must have been much larger than it may appear because its ruins have been spread far beyond the present township into the adjoining villages of Bahadarpur and Manaspura.

A fragmentary stone inscription was found in Bahadarpur 1.5km from Kandhar in 1959 in an old well known as Khas Bag. The stone became visible when the water in the well dried up in the summer of 1957. Keshavrao Dhondge, a local leader, picked it up and set it into the Tulsi-Vrindavan in his courtyard, obviously unaware of the historical significance of the inscription on the stone. The writing provides a detailed description of the buildings in the ancient capital and the munificent activities probably of Krishna III of the Rashtrakuta dynasty. Among the deeds of the king were the construction of a mandapa (pavilion), named Sarwa-lokashraya near the temple of the well known god Kshetrapala. The inscription also mentions the temples in one city which can still be identified although they have recently been extensively repaired.

The epigraph mentions that the name of the ancient city is Kandharpura which is clearly the present Kandhar. The Rashtrakuta monarch has been described as a Kandhar-pura-var-adhishwara in some of his records. It was also known as Krishna-Kandhara, that is with the title Kandhara. And so, the title could be said to refer to him as the ‘supreme lord of Kandharapura.’

Among the ruins in the town, the most noteworthy are the fragments of a gigantic sculpture which were gathered over a period of time from a field at Manaspura which is owned by Narayan Vithoba Manaspure and have been kept in the medieval fort in the town. Further explorations of the field did not reveal much beyond a few fragments of dressed stones. And so it was inferred that this was the place where the shrine of Kshetrapala must have been located. Excavations were then carried out in co-operation with Dr. A.P.Jamkhedkar, the then Director of Archaeology of Maharashtra.

The excavation site was selected because some fragments of a huge sculpture were found in that locality. They include the face, ear and foot, which indicate that it was a colossus. The face which is in two parts, measures 1.57m in height from the top of head to the nose and from eye to eye and up to the left ear it measures 2.48m. There is a third eye on the forehead and the face appears to be carved in two separate slabs which join at eye level because the edges of both the slabs at this point are smoothened. The left part of this forehead is slightly broken. The ears too appear to have been carved separately. The left ear which has been found is 1.60m high and it has an elongated lobe (pralamba-karna-pasha), in which is a heavy disc (tatanka-chakra). In the upper part of the earlobe are two rings suspended with three pearls each. They are clearly of the bali or balika variety. The slabs of the face are not very thick (maximum thickness 23cm), nor do they appear to have been broken. This would suggest that the sculpture was not finished at the back as it was not intended to be seen from behind.

A small section of the belly was recovered apart from two pieces of hands which are broken at the wrists. The left hand holds a citrus fruit (bija-puraka) whereas the object in the right hand, being only a fragment, cannot be identified. The left hand is 77 cm broad and the right hand is 1.15m and 1.8m long. A squarish portion below the wrist of the right indicates that the hands were carved separately. However, both of them wear thick bangles.

Two leg fragments, broken at the level of the knees, have also been found. The left foot is 1.75m long and 55cm broad at the back near the ankle. Two anklets adorn the legs and there are rings on all toes. Of course, the most remarkable feature of the right leg, is that its sole and the lower side of the toes have been well finished. This is very revealing because if such a massive sculpture was intended to be installed in a standing position, there would have been no need to finish the underside of the feet – which means that the image probably was intended to be kept in a supine position.  More credence is given to this view when one considers the squarish tendon which has been provided at the back of ankle. It was obviously meant for fixing into the mortise hole in the floor. There should therefore be little doubt that the gigantic image was placed in a shrine in a supine position. This then would be the shayana class of Shiva image which is extremely rare in the entire range of Indian art. The only parallel that can be cited is that of the Vasuki-shayana Siva painted in a Vatakkaunatra temple at Trichur in Kerala which belongs to the sixteenth century.

The next problem that cropped up was how the image was fixed in the temple proper. Fragments of the sculpture are huge and were unlikely to have been moved far from their original location, except of course from Manaspure’s field where they were found to the fort in the town. And so, excavations were carried out in the field where the fragments of the sculpture were found. On digging hardly a few centimetres, dressed stone slabs were encountered. Tracing all around revealed a structure that took the form of a human being which spread over 60 sq.m. It was unique because it did not conform to any known temple plan. The left arm is 10m long and the right one 9.95m. The position in between two arms, which resembles a human body, has a maximum width of 4.65m and the legs are 15.35m long. It was a gigantic figure. 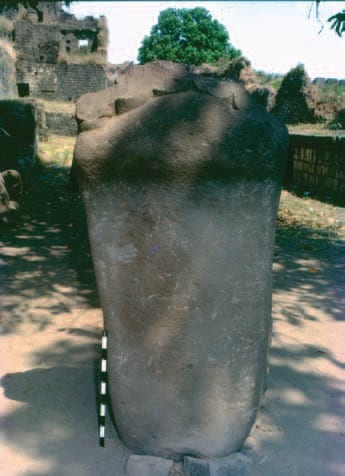 If we accept that the total height of a person is seven times that of the face, then the total height of the image would be about 16m (because the length of the face from the top of the head to the chin is 2.25m). This is commensurate with the dimensions of the structure, and as such the image could be easily accommodated in the shrine in the reclining posture.

It appears that the gigantic sculpture was carved out on the low hillock opposite the field, about 100m to the east. A massive dyke of dolerite runs north-south through the hillock from which stone was quarried for the sculpture. The top surface of the hillock is full of stone chips which suggests that the different parts of the sculpture were fashioned there as it was easy to heave them down to the site of the shrine over the slope of the hill.

It has been suggested that this colossus is probably the God Kalapriya whose temple, as the inscription records, existed in the ancient capital Kandharapura. But Kalapriya is one of the names of Surya. However, the present image is not exactly that of Surya as it has a third eye on the forehead and neither is it Siva Bhairava who is a Kshtrapala, the protector of fields. So the mystery persists and perhaps there’ll be a time and an occasion when we will be able to decipher the mysterious identity. But nevertheless, the undeniable truth remains – this image and the human shaped shrine of which belong to the 10th century are unique in India.