The 18th century heralded in the creation of beautifully designed and decorated mansions known as Wadas, which reflected the aesthetic achievements of Maratha architecture. Their creative use of functional spaces set them apart, giving them a spartan yet elaborate structural elegance. Their clean, pure lines exuded a well defined dignity. In order to appreciate the form of Wadas it would be appropriate to consider the elements that went into their making.

To begin with, one must understand that the main theme around which they were planned and built was the courtyard or ‘chowk’ system. The main intention was to provide light and ventilation to the inner parts of buildings, which had thick walls with very few  openings (probably to protect the residents from enemy attack and to discourage looters). Designed, planned, and built perfectly on a modular system developed by the Maratha architects, Wadas were based on the square grid pattern.

In most Wadas, there were two courtyards, though in some smaller mansions there was only one. Larger and more elaborate complexes of the wealthy had as many as six or eight chowks. Evidently, social and political status and the financial capacity defined the living spaces of the owner and the number of ‘compartments’ he would need to meet his living standards. Accordingly, each  compartment of any Wada was positioned according to importance, used for a specific purpose and suitably named. Usually, the Phadacha Chowk, which was the front or entrance courtyard, was used for official administrative purposes whereas Khasgicha Chowk, which was the inner or rear courtyard, was a private, domestic space. The devadi, a place for guards, took the form of two small platforms on the front extremity of a Wada and on either side of the entrance gate. Immediately inside the main gate was the osari, which consisted of two large verandas. Both were part of an open veranda built abutting the four sides of a courtyard. Usually, the visitors of a respected status were seated in this space. 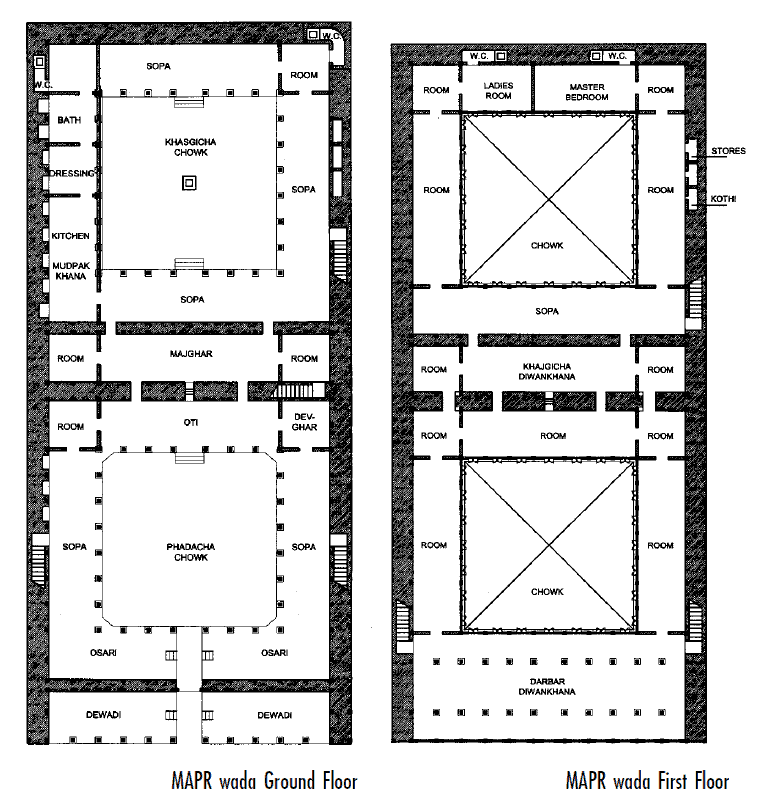 Measuring Units
The main units of the square grid pattern were known as Khan and Ghay. The former was a unit derived with the help of two measuring units known as Gaj and Tasu. Usually, a Gaj was equal to 24 Tasu. In contemporary terms, a Tasu is 3 cms and a Gaj equals 72 cms. During the final phase of Maratha architecture, a Khan was 173 cms or 2.25 Gaj + 3.5 Tasu. Any Chowk of a Wada was divided into odd numbers of Khan, that is 3,5,7,9 and never in even numbers like 2,4,6,8. Generally, a Ghay was equal to two Khan and planned around all the four sides of a Chowk. The space at the four corners of any Chowk was known as Chopkhan or Chaphekhan and measured 2 x 2 Ghay lengths.

Verandas on either side of the courtyard were known as sopa. Around the main courtyard they were called ‘Kacheriche Sope’ and used by the clerks, accountants, and office assistants. Sopa spaces around the inner or rear courtyard were for the purposes of household activities, like dining, storing, milling and grinding of grains and sorting and cutting of vegetables and those at the extreme rear were used for storage, as bathrooms and dressing units. The otti, used as a sit out by the owner, was a veranda directly opposite the main gate. A large room, the majghar, measuring one ghay (see box), situated between two courtyards, was used as a private drawing room. Its name had been derived from two Sanskrit words, ‘madhya’ meaning central, and ‘griha’ meaning space. Combined, they referred to the central portion of the Wada. To the left of this space was the Mudpak Khana (the kitchen) whereas Pangaticha Sopa, which was the dining area, was a veranda, which lay between the majghar and the rear chowk.

First floor plan – The upper floor plan consisted of beautifully decorated halls known as diwankhanas. These were used by the residents for different purposes and were tastefully decorated with central rows of highly polished wooden pillars called Surudar Khamb and cusped arches known as Mahirapi Kamani. They were ventilated by decorative wooden windows with small Mahirapi Kamani while the floors were covered with woven carpets. The Darbar Diwankhana hall above the main entrance was used for official meetings attended by important invitees. Here, performances of song and dance were also presented. On the other hand the Khasgicha Diwankhana was meant for family gatherings and private functions. This hall was also used for religious ceremonies and performances like Pooja, Katha – Kirtan.

In addition to these two prominent diwankhanas, one or two other rooms were specially created for family members. Exquisite paintings adorned the walls, columns, beams and even ceilings, which were colourfully painted with patterns of flora and fauna. Other areas of the Wada, especially above the rear chowk, were used as private rooms, bedrooms and ladies rooms. These and other interior spaces were lit by handya and zumbers (chandeliers) and by samai, which were lamps standing on brass posts. There were also fanas, hung from the ceiling by brass chains.

Beautification, of course, was not merely restricted to spaces within but was done on the outside as well. Fine surface plastering, decorative windows, carved mahirapi arches and, in many instances, facades patterned the exposed brick masonry walls. Rising to two or three floors (few had four floors), these buildings sported a baradwari on the topmost floor. This was a sort of ‘penthouse’, which also served the purpose of a watchtower.  During the latter half of the 18th century, a number of imposing mansions, enclosed with fortified walls, were built. Peshwa Balaji Bajirao, alias Nanasaheb, started this tradition by building a grand Wada in Pune, which came to be known as Shaniwarwada, Chimanbag. With this Wada, the Peshwa style of Maratha architecture was well and truly established. It was noticeable by its strong fortified walls, which enclosed a large open space with gardens, water ponds, fountains, water storage cisterns, wells, stables for horses and sheds for cattle as well as a watchtower. Amidst it all stood the main Wada in all its majesty. With the benchmark set, a number of Maratha Sardars, noblemen and wealthy citizens began building their Wadas in the towns in which they resided and gradually the style spread across the territory of the Marathas. However, it did not stop there but percolated to other levels of society. The trend struck root and soon the fashion statement of the Wada became a common inheritance as homes, even with a single chowk, appearing with dignity. Thus into the very core of architectural history was embedded the tradition of the Wada