They may be ‘primitive societies’ but their treatment of women and complex social issues will often leave you amazed, as will their age-old wisdom.

Welcome to Bastar, the Adivasi heartland of India. With over 70 per cent of its population belonging to assorted tribes, it is only natural for Bastar to be celebrated as a veritable melting pot of races.

Home to the Muria, Muria Gond, Hill Maria, Bison-horn Maria, Halba, Dhurwa, Bhatra and Dorla communities, Bastar is a treasure trove of primitive but rich cultures that have withstood the ravages of time with simple inherent logic. That said, change is an inevitable part of life and these societies, like others, are also on the verge of change, however uneasily. Formerly, Bastar, along with the district of Dantewada was part of the princely state of Bastar. After Independence, this state, as well as Kanker, acceded to the Government of India and were merged to form the Bastar District of the State of Madhya Pradesh. Today, it is a part of the State of Chhatisgarh, which was carved out of Madhya Pradesh. 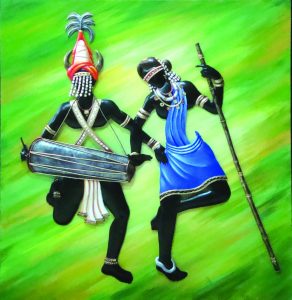 Traditionally, the area finds mention in the Ramayan as the Dandakaranya, while the Mahabharat says it was part of the Kosala kingdom. In the medieval era, the princely state of Bastar was established in 1324 CE when Annama Deva, brother to the last Kakatiya King Pratapa Rudra Deva left Warangal and established his kingdom at Bastar under the tutelage of the local goddess Danteshwari who continues to have the famous temple of Danteshwari dedicated to her, and comes alive during Dusherra.

The Gonds are one of the most famous and important tribes in India, known for their unique customs and traditions. The term ‘Gond’ is derived from the Telugu word ‘Konda’ which means hill. Gond Tribes are primarily located in Madhya Pradesh, Chhattisgarh, eastern Maharashtra, northern Andhra Pradesh and western Orissa. In Chhattisgarh, the Gonds are the largest tribal group in terms of population. More than 20% of the Gonds in Chhattisgarh live in the Bastar region only. The Gonds are predominantly Hindus and like to live to live in groups in small villages. The main language of the Gonds is Gondi but about half of the Gond populations also speak Indo-Aryan dialects including Hindi. The Gonds are traditionally agriculturalists and some practice shifting cultivation even today. Other major activities include collecting forest produce, fishing, hunting, forging metal goods in cottage industries and other primary sector activities. They also have a special skill, passed down from generation to generation – the secret of medicinal plants. Gond society is highly stratified unlike the usual practice of egalitarianism among tribals.

One of the unique characteristics of the Gond marriages is that the groom has to pay a bridal price to the father of the girl. In this way, the system gives respect and power to women in the society. Another popular practice among the Gonds of Bastar is ‘Ghotul’ which allows unmarried young boys and girls to intermingle and choose their life partners.

Predominantly found in the Bastar region of Chhattisgarh, the Abhuj Maria tribes are one of the major sub-castes of the Gonds. These tribes can be found mainly in the deep forests of Narayanpur Tehsil of Bastar district. Abhuj Marias speak a Dravidian language called Abujmaria. The 1,500 SQ miles of lush green and dense forest area, which these unique tribes inhabit, is known as the Abhuj Maria region. They choose to live in isolation and avoid intermingling with outsiders. It is believed that they shoot down strangers with their arrows and so are very feared by outsiders. Since they live in isolation, their way of living, customs, traditions and moral values have been retained. Drinking liquor is very common among men and women. Equality and brotherhood are highly valued principles.  Both men and women use only a piece of fabric and don’t cover their body completely. Women of the Abhuj Marias love to wear several iron rings, sometimes as many as 20 around their necks.

They mainly reside in Jagdalpur Tehsil of Chhattisgarh. Like the Abhuj Marias, these tribes also like to live in isolation in deep forests and avoid contact with the outside world. Their culture and traditions and daily life are almost similar to Abhuj Marias. They also practice shifting cultivation and collect forest produce for survival. Like Abhuj Marias, they do not plough the earth, as it would mean inflicting pain on her body.

They derive their name from the Bison Horn and which they wear during their dancing rituals.

The Halbaas are one of the major tribes found in central India. In Chhattisgarh, they are mainly found in Bastar, Raipur and Durg districts. Perhaps the name ‘Halbaa’ has been derived from the Hindi word ‘Hal’, the plough, which goes on to prove that they are primarily agriculturists.

The Dhurvaas are amongst the most important tribal groups in Bastar district. Also known as Parjaas (the public), they rank second in the hierarchy of the Bastar tribals, after the Bhatras. To prove their high status among the tribals of the region, they prefer to be called as Dhurvaas, which connotes the status of some type of Mukhia (Village Chief). They are very caste conscious and do not mix with tribes of lower status. The practice of polygamy is quite common. Normally, men occupy themselves with hunting, agriculture and protection of the family.

The Murias live in the plains. Their primary activities are similar to other Gond sub-castes and they survive on agriculture and collection of minor forest produce. As far as religious and social beliefs are concerned, the Murias have several totems and several gods of villages and tribal sub-groups. They are highly superstitious and strongly believe in sorcery. There is no functional division of castes in the society and they have their own socio-legal hierarchy of tribal administration.

The Bhatras are known for their unique costumes and traditions. Women enjoy a high status and the Bhatra girls have full freedom to choose their husbands or live with a partner of their choice. Like other tribals, they consume liquor, fruits and animal food.

Tribal culture also distinguishes itself through the Ghotul, an unusual but very democratic approach towards learning. This system, which was said to have been conceived and created by Lingo Pen, a cult hero of the Gond tribe, provides young people with the unique opportunity to be independent and learn through interacting with their peers. The function of the Ghotul is to provide a space where young people can understand, in a simple way, the complexities of social, cultural and sexual customs and grow into responsible custodians of tradition and beliefs.

A touch of Dhokra

Among the rich craft activities of the region is Dhokra, which involves precision, practice and skill. The preparation involves the use of cow dung, paddy husk and red soil, with beeswax. Dhokra work uses the increasingly rare lost wax technique to make beautiful vessels, jewellery and images of local deities. Among the areas where this craft is widely

Among the rich craft activities of the region is Dhokra, which involves precision, practice and skill. The preparation involves the use of cow dung, paddy husk and red soil, with beeswax. Dhokra work uses the increasingly rare lost wax technique to make beautiful vessels, jewellery and images of local deities. Among the areas where this craft is widely practised are Kondagaon, Raigarh and Sarguja. Craftspersons from the Ghadwa community are known to be experts in this particular craft. However, time and tide demand progress and development. The tribal societies of Bastar find themselves on the crossroads asking one question above all—to change or not to change?

Choosing progress will demand significant shifts in lifestyle and traditional practices. Will they be able to cross over and still retain their identity?

No easy answers there, and no simple solutions in sight either. However, if there’s one thing history has proved over and over again, it is the folly of underestimating human resilience. 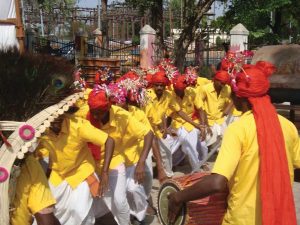