When Chingam, the first month of the Malayalam year (August-September), arrives, God’s Own Country comes alive with a rich intensity of colour, heralding Onam, a week long fiesta of music, dance and sumptuous food. During this time, Nature is at her dramatic best in Kerala when the torrential monsoon rains have washed the land clean and verdant fields emerge green, refreshed and brimming with life. 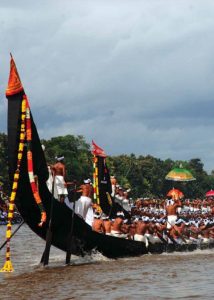 Flowers fill the countryside and trees are laden with fruits. The pageant is all set for Onam – signalling the start of the harvest season. The vigour and enthusiasm of the season inspires celebrations with traditional fervour as the devout visit temples, families get together and exchange gifts of clothes called Onakkodi and merrymaking is the order of the day.

Redolent with myths and legends, it recreates anidyllic and prosperous Kerala once ruled by Mahabali, a benevolent king, “when all men were equal, when no one was poor, when there was neither theft nor dread of thieves.” The earthly utopia irked the gods and Lord Vishnu came down to earth in the guise of Vamana, a midget and approached Mahabali, asking for three steps of land. As the ever-willing demon king agreed to this, Vamana started growing in size. It is said he measured the entire earth in one step and the heavens in the second step.

When Vamana asked Mahabali for space for the third step, the principled ruler offered his head, realising that the dwarf was none other than Lord Vishnu himself. The Lord placed his third step on Mahabali’s head and sent him down into the nether world. Considering the king’s good deeds, the Lord granted him a boon to visit the earth once a year to meet his subjects. The festival is a demonstration of the jubilation of his subjects over his annual homecoming.

In Thrikkakara, near Kochi, there is a famous temple depicting this legend (Lord Vamana with one foot placed on Mahabali’s head). It first began as a harvest festival, celebrating the season of plenty. In fact, the very word Onam means prosperity. It is recaptured in a popular song: “When Mahabali ruled the land, everyone was equal; happily they lived, danger befell none; there was no falsehood or fraud, and no untruth.” Thus, it is a season for all the communities of Kerala to rejoice. Today, it is no longer a Hindu celebration alone but Kerala’s national festival celebrated by all Malayalees, irrespective of religion, caste or creed. 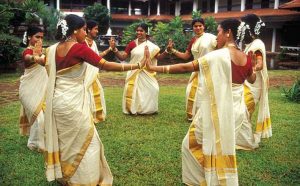 With the advent of Atham, the festive spirit catches on and virtually every village and town turns vibrant with hectic activity almost round the clock. Synonymous with flowers, gifts and feasts, Onam represents the festivities after the harvest. It commences with Atham and lasts for a fortnight culminating on Uthritathi. During Atham, people gather flowers and arrange them in various patterns, known as Athapookalam, in the front yard of every house.

The climax of the ten-day celebrations is on Thiruvonam, when the courtyards of every home in Kerala are filled with floral carpets of pookkalam, welcoming Mahabali. Clay images representing him and Vishnu are made and kept in a specially decorated space in the courtyards. This is the time when exciting backwater carnivals, aquatic festivals and snake boat races are organized along the sacred River Pampa as part of the celebrations. Aranmula, a tranquil village in the district of Pathanamthitta plays host to a post-harvest boat pageant and race, which have become an integral part of the land’s ethos.

When crowds line the banks of the placid backwaters of the Pamba River to cheer the sleek snake boats (representing various villages) slicing through the waters to a spectacular finish, the place reverberates with the chants of vanchipaattu (boat song). Beautifully adorned, with fluttering flags, participants holding aloft parasols of glittering silks and oarsmen splashing their oars in unison with the rapid rhythm of the boat songs, these boats are a spectacular sight.

It is said that the idol within was carried along the River Pamba and brought here in a raft made with aru (six) pieces of mula (bamboo). From then on the custom of snake-boats, from all neighbouring villages, accompanying the sacred boat, came to stay. The event also celebrates the anniversary of the foundation of the Parthasarathy Temple. 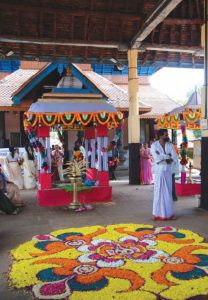 The joyous occasion provides an opportunity for Keralites to display their prowess in diverse fields of art and craft, sport and games. Courtyards resonate with the rhythms of Kaikottukali, a dance performed by women and children around a nilavailakkavu (lamp), accompanied by singing and dancing the Thumbithullal, a traditional folk dance (among other dances). Young men and women, especially in rural areas, are seen singing Onam songs, as they celebrate on swings slung from the branches of trees. 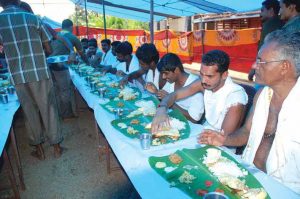 The celebrations also provide an opportunity for people to renew friendships, get together with relatives and revive various folk forms such as Pulikkali. In addition to traditional activities, in contemporary Kerala, there are exhibitions and sales, flower shows and food festivals across the State. The region comes alive with classical and folk dance performances, music recitals, cultural pageants, and much more. 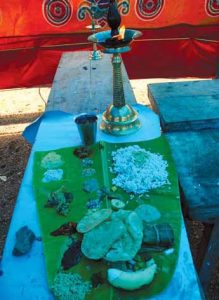 Every year on the fourth day of Onam, Thrissur, reverberates to the rhythm of Pulikkali, a native dance form in which painted men with masks prance like tigers, gyrating to the exciting beats of indigenous percussion ensembles. 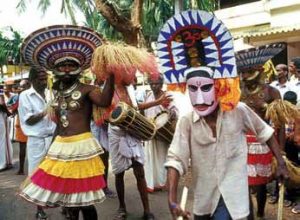 In another dance called Kummatikkali, dancers donning colourful masks representing epic characters and leafy costumes made out of medicinal grass, dance to the strains of traditional ballads and the rhythm of the onavillu, a sacred stringed bow. They move from house to house and are given generous gifts by onlookers. Tableau and pantomime, accompanying these performers lend colour and gaiety to these thrilling events and spectators cheer the masked dancers. 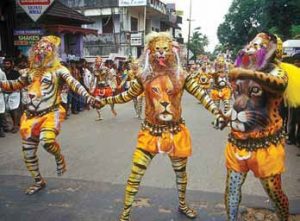 Perhaps the most important event during Onam is the grand sadya (lunch) that awaits the Malayalee on Thiruvonam (last day). Whatever happens, in no household is this lunch missed. There is a saying in Malayalam, kaanam vittum Onam unnanam, which means, ‘we should have the Thiruvonam lunch even if we have to sell our property’. 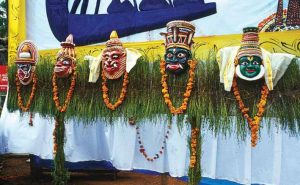 Yes, this festival is synonymous with sumptuous delicacies such as kalan, olan, erisseri and avial. Known as Onasadya, the feast is a multi-course meal served in a distinct order on tender plantain leaves and savoured in the company of kith and kin. Split bananas, crunchy banana chips, crispy pappadam and payasam form an integral part of the menu. 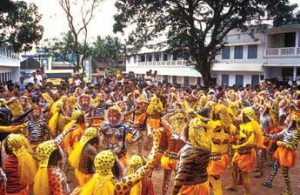 Even after Onam is over, the delight lingers, carrying the spirit on the enthralling wings of its exciting aftertaste, which stays as time passes, keeping expectations alive for Mahabali’s next visit. From festival to festival, the life of the region creates a lively cycle of expectation, keeping alive a centuries old tradition. 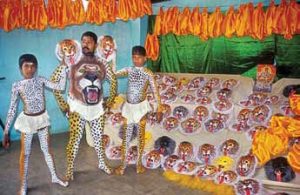