The origins of the great Kushans can be traced all the way to north-western China where they were a part of the Yueh-Chi, a Central Asian tribe. Living in the Kansu province in 165 BCE, they were known at that time as Keui-Shuang. Life there was not easy and in time they were driven out of their homeland by rival tribes who forced them to descend into Bactria (Afghanistan) where they became feudatories of the last Indo–Greek ruler, Hermaeus, in mid first century BCE, long before they established their independent rule by carving out a principality of their own under Kujula Kadphises (c.30 – 80 CE).

The principality was consolidated and expanded by able successors who extended its boundaries until it grew to become a kingdom in the true sense of the word. From then on it burgeoned into a vast empire straddling Central Asia, Afghanistan and north India. For a long time, there was no unanimity among scholars about the chronology and even the identity of some of the Kushan rulers, but most of these controversial issues have now been settled by the discovery of an inscription of Kanishka, which is of crucial importance for the history of the dynasty. 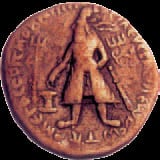 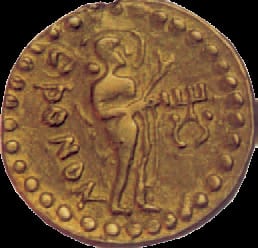 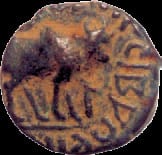 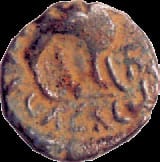 It was found at Rabatak in Afghanistan, not far from Surkh Kotal, which has yielded a wealth of Kushan sculptures. The record is unique in as much as it throws a flood of light on Kushan history. It is in Greek script and in the ‘Arya’ language as stated in it.

The document confirms that the first independent king of the dynasty was Kujula Kadphises who ruled from 30 – 80 CE. He was succeeded by Vima I Tak(to) (80 – 90 CE) who issued the Soter Megas coins. In fact, the statue from Mat at Mathura showing a seated Kushan king has now been identified as that of Vima I Tak(to). His successor, Vima II Kadphises, (90 – 100 CE), known earlier as Kadphises II, was the first king to have issued gold coins in India. 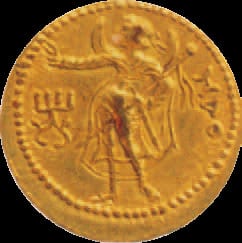 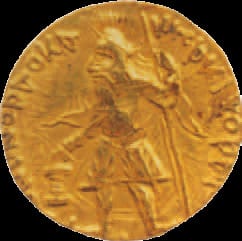 These coins indicate that he was a great devotee of Shiva, which is evident from the representation of the god with his bull, holding a trident; corroborated by the legend in Prakrit on the reverse: “Maharajasa rajadhi rajasa sarva loga ishvarasa mahishvarasa Hima Kataphishasa tradata” (King of the kings Lord of all people, Lord of the earth Emperor, Vima Kadaphisa, the saviour). The legend is noteworthy for the epithets “Sarva loga ishvara (God of all the people) and mahishvara” (Lord of the earth), which are those of Shiva and were adopted by the king. 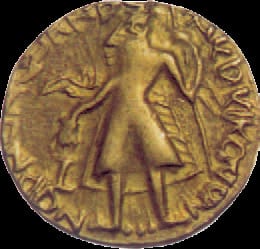 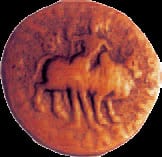 Kanishka (100 – 126 CE), the greatest Kushan king, succeeded Vima II, in c.100 CE, which marks, according to some, the beginning of the ‘Shaka’ era from the year of his accession. His empire was spread all over North India up to Pataliputra (present Patna, in Bihar), Afghanistan and Central Asia.

An enlightened ruler and a great patron of literature and the arts, he was more inclined towards Buddhism. Perhaps it was because of this that the fourth Buddhist council was held at Kundalavanavihara in Kashmir at the insistence of his friend Ashwaghosha. It was during this council that the great schism occurred between the old school of Theravadins (Hinayanists) and the Mahayanists in which the latter became dominant.

The Theravadins believe that Buddha cannot be described in words or form and that worship therefore should be symbolic, while the latter do not agree because the texts like Mahavastu and Saddharmapundarika assign divine characteristics to the Enlightened One. This explains how the Buddha image came to be fashioned for the first time during the reign of Kanishka.

During his time, the great Kushan king also encouraged and supported the revival of Sanskrit. From the time of Buddha in the 6th century BCE, Prakrit had become dominant, but it was Ashwaghosha who composed two works – Buddhacharita and Saundar ananda, in Sanskrit during his time.

He issued a remarkable series of coins which depict the king on the obverse and a deity on the reverse. The deities are Hindu, Buddhist, Greek, Iranian and even Central Asian, reflecting the policy of religious ecclecticism followed by Kanishka. A distinguishing feature of the coins is that the name of the deity is mentioned in Greek. Huvishka (126 – 14 CE), who succeeded Kanishka, also pursued this policy.

Noteworthy among these are the issues depicting Skanda, Kumara, Vishakha and Mahasena, which indicate that these four divinities were later amalgamated into one deity, Kartikeya. The Kushans ruled from two capitals: Mathura during the winter and Purushpur (the present Peshawar) during summer. Taxila too was equally important owing to its strategic location on the tri-junction where the trade routes from the Ganga valley, Afghanistan and Central Asia converged. 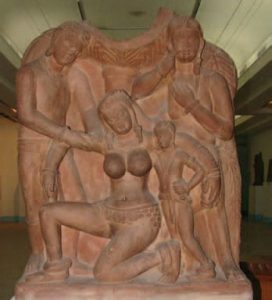 Artists and artisans at these places were busy during the early centuries of the Common Era, as is testified by the prolific production of artistic creations. Stylistically, the art of Mathura and Gandhara differs considerably although both the schools flourished simultaneously. The Mathura school had its roots in Indian art traditions whereas the Gandhara school was dominated by the classical Greco-Roman influence.

The former catered to the needs of all the important religions of India at the time – Hinduism, Buddhism and Jainism, whereas the latter was completely Buddhist but for a few sculptures of Hindu deities like Shiva, Durga and Surya as also a few of the Jain Tirthankaras. Moreover, besides several Buddhist chaityas, there was also a Zoroastrian temple at Taxila.

Mathura, one of the largest ancient cities in India was a great religious centre for the Hindus, Buddhists and also Jains. Located on the bank of the Yamuna, it was the most prosperous city under the Kushans and grew into an important trade centre. There were numerous Buddhist chaityas and viharas as also Hindu and Jain temples, and hence was called the ‘City of Gods’ by Ptolemy. 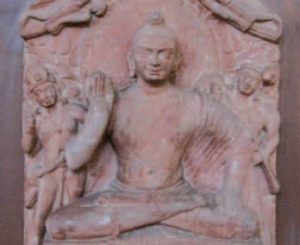 In the Mathura school of Kushan sculpture, carving is in bold reliefs, in the mottled red sandstone from Sikri. This can be seen in the numerous images of gods and goddesses of different pantheons as well as yakshas and yakshis. More noteworthy are the sculptures depicting women engaged in their chores. They are earthbound but are also marked by freedom of movement and appear lively and sensuous.

However, the real achievement of the Kushan artists is the Buddha image, which appears for the first time in history. The earliest Bodhisattva statue is that from Shravasti, now in the Sarnath Museum, which was the handiwork of sculptor Sivamitra, and is characterized by plumpness. The Buddha image from the Katra mound is a mature product of the Mathura school. It is a bold attempt at representing the master in human form. These Buddha images served as models in the later period.

Images of a number of divinities were carved for the first time during the Kushan period. Gandhara, on the other hand, had once been an ancient republic in the 6th century BCE with its capital at Taxila near Ravalpindi (Pakistan). It was located in the north-western part of the sub-continent and comprised Peshawar and Ravalpindi districts, Kabul (ancient Kubha) and Swat (ancient Suvastu) valleys. The Indo-Greeks, Alexander’s successors, ruled here from c.250 – 50 BCE, which explains the classical influence on Kushan art that lingered till the 6th century.

Gandhara art has therefore been described as the eastward extension of the Hellenistic art and the westward extension of Indian art. There seems to be some debate on whether the influence is Greek or Roman but it would be better explained as Greco- Roman. It spread far beyond the confines of Gandhara into Afghanistan, but was concentrated more in the region between Taxila and Kabul.

Gandhara art is almost completely Buddhist. Greyish schist with a bluish tinge was used on a large scale, but marble or limestone was used in Afghanistan. Generally placed in the 1st – 6th century CE, time bracket, it flowered under Kanishka with prolific production, which includes numerous Buddha and Bodhisattva statues and reliefs of great beauty depicting events in the life of the Enlightened One.

The Buddha image in Gandhara art appeared almost simultaneously with that in Mathura. Numerous examples of exquisitely carved statues have come to light, which are amongst the finest specimens of world art. The Buddha image is clearly a combination of Hellenistic  Roman elements and classical physiognomy and Indian iconography.

For art to have flourished, as it is evident it did, the empire of the Kushans must surely have providedthe appropriate opportunity, impetus and support. And that could only have been possible if there was a measure of stability, prosperity and inherent regard for the need and value of cultural expression. What gave this expression an overall spirit of inclusiveness was the fact that the empire spread over an unusually wide geographical area, bringing into its fold cultural, religious and social diversity. The great Kanishka must have been able to contain this mighty empire because of his unique abilities, which included statesmanship and military prowess as well as vision. 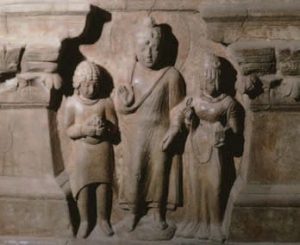 With his passing, the empire began weakening, as those who followed him were unable to match the levels of performance that he had set. Their inability to sustain and build on the strengths of their empire weakened it so much that it caved in when the Sassanians invaded in the third century. Thus passed into the shadows of history and time a glorious epoch.